When the Moon was part of the Earth, it had no clear boundaries but formed a sphere of slightly thicker material than the rest, so the whole earth was a bit like an egg. However the Moon was located slightly more on one side of the earth, where there is now the Pacific Ocean. This are is now characterized by the so-called 'ring of fire'.

The Earth only hardened to its current state after the moon was expelled and was outside the earth, before it was a living organism. The first three most upper layers were produced after the separation of the Moon, see Earth's inner layers (eg Schema FMC00.004).

Schema FMC00.315 is an illustration depicting the Ring of Fire as the scar resulting from the separation of the Moon in the Lemurian epoch. 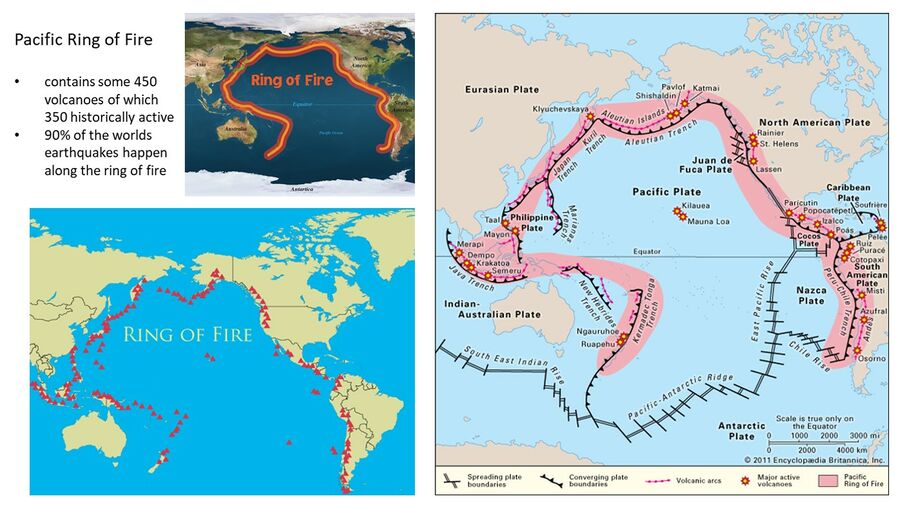 When man, by working out of the spirit, transmutes the physical body, he conquers death. The separate forces exhaust themselves when they take on special forms. The force enters into the form with ever increasing density and hence life in the Lemurian Age had to receive a new impulse, which was brought about by the turning around of the Earth Globe. The axis of the Earth was gradually turned. Previously there was a tropical climate at the North Pole; later through the turning around of the Earth axis the tropical climate came into the middle region. This change proceeded with comparative rapidity but lasted nevertheless for perhaps four million years. [Rudolf Steiner later revised his time scale of earthly evolution to much shorter periods. Ed.] Four million years were needed by the Moon Pitris in order to turn the axis of the Earth. At that time the Moon Pitris development was already much further on than that of present day man.

If we now follow up the course of the Earth evolution we may ask how the separate classes of spiritual beings participate in its progress. Spiritual beings at different stages of evolution directed the processes of the separation of the Sun and Moon from the earth, as a result of which that progress came to pass.

We have first to consider a class of spiritual beings which attained a certain stage of evolution during the Old Sun period; they belong to the Old Sun evolution because it was destined to provide a field of action for them. These are beings which separated the sun from the earth during the Earth period, because during Old Sun they were Sun-bound in the same way as humanity is now Earthbound. As we have seen, they needed the Sun for their further evolution and with the Sun they left the Earth in order to work upon the latter from without.

When the Sun spirits had withdrawn the Saturn and Moon spirits were left on the Earth. The development of the Saturn spirits was such that they could direct and guide the separation of the Moon from the Earth; they had passed through the same stage on Old Saturn as the Sun spirits had done on the Old Sun; their maturity had preceded that of the Sun spirits, and they were therefore able to separate the Moon from the Earth and to stimulate from within the inner development of man, who, otherwise, would have hardened and become mummified.

It may be said that

The Sun is a cosmic symbol for the act of the Sun spirits, the Moon for that of the Saturn spirits. And what is left upon the Earth itself [are] Spirits of the Old Moon period.

Therefore, you must imagine, that at the time of these giant oysters the moon was not separate from the earth, but dissolved in its thickish soup. It had no clear boundaries and just formed a sphere of slightly thicker material than the rest. Thus it made the earth as a whole into an egg. The moon, which in our time affects only our im­agination and the bodies of women and female animals, was at one point part of the earth.

That means that at some time it must have moved away. Here we reach a tremendously impor­tant moment in the development of the earth. The moon, which in our time is always outside the earth, used to be inside it. Then the earth expelled it, and now the two are separate.

When we study the body of the earth we discover something remarkable.

[Fertility of the organism]

Let us return to the earth condition when it still contained the moon. Then the secretions of the moon gave the earth the function of mother, while the sun produced the ‘fatherly’ substances in constantly creating those lumps of slime and surrounding them with a thick coat of horn. These floating lumps of slime constantly fertilized what was underneath them in the earth soup, which was kept alive by the moon. The earth, then, was a huge egg, ferti­lized continuously by the influences of the sun.

If this situation had continued, it would have led to a very uncomfortable condition. The moon would have been cast out; the earth would have become infertile, and everything would have died after all.

True, the moon was expelled, and the earth died. But some of the old fertilizing qualities were preserved within the bodies of female humans and animals. Before this expulsion of the moon, there was no birth as we know it now. Just as you take some of the old yeast and put it in the dough if you want to make a new loaf of bread, so some of the old moon substance remained in female bodies so that they could be fertilized. The egg thus fertilized is merely a reproduction of the ancient earth egg. It is no wonder that pregnancy, the length of time the unborn child is carried in the womb, is calculated on the basis of the moon phases; after all, the moon is still involved in repro­duction. If you are a baron’s son, you must live within the terms of the legacy your father left behind. The same is true for the fertilized egg, which actually derives from the ancient moon soup. It must still live by the moon’s terms, because it has inherited its substance from the moon.

[Before and after the separation of the moon]

The moon was not located at the centre of the earth, but more to one side. If you look at the earth as it is now, you will notice that on one side, where Australia is, there is a lot of water; whereas the part con­taining Europe and Asia consists mostly of land. In other words, land and water are not evenly distributed, but most of the land is on one side and most of the water on the other. This uneven distribu­tion existed also in the period when the moon was still in the earth; it was lying more to one side, where the earth had the general tendency of being heavy. Of course, on this side where it contained a solid substance, the earth had to be heavy.