The Earth as we know it consists of nine different layers or strata, of which the mineral physical earth is only the outermost skin or crust. The interior structure of the earth is related to the evolution of the Earth in its various stages, and the 'moulding' of its bodily structure by the Earth's 'I'.

Schema FMC00.004A gives a simple reference overview table of the nine layers or strata of the earth. 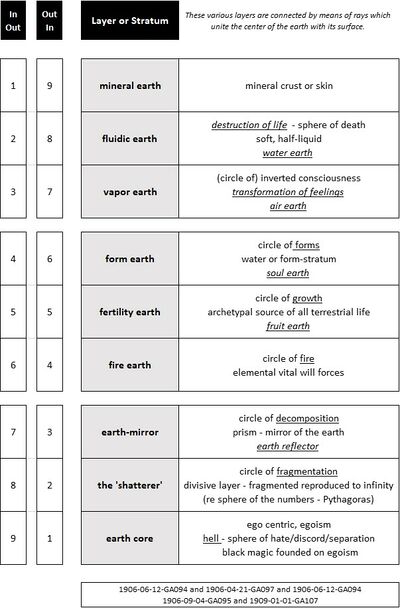 Schema FMC00.004 provides a synthetic study table, summarizing how Rudolf Steiner described the nine inner layers or strata of the Earth, and linking this to the explanatory evolutionary framework by Iwer Thor Lorenzen.

Lorenzen (1969, 1976) explains how the different strata arise as a polarity of contrary forces is working (outwards, inwards) in the solar system macrocosmos, and how the freeing of the different layers in the spirit and astral world corresponds to the formation of these strata alongside the development of the outer etheric spheres of the planets of our solar system (and the physical planets as a result of the opposing spiritual hierarchy). This is linked to the evolutionary pathway of the Earth and its bodily principles, and the 'incarnation' or development of the Earth's 'I' in stages that correspond to the development of humanity's 'I'.

It is recommended to read Lorenzen's two book references listed below to gain an understanding of what is shown in this table. Also consider FMC00.006 as related to the lectures on the Earth's evolution (eg Genesis). 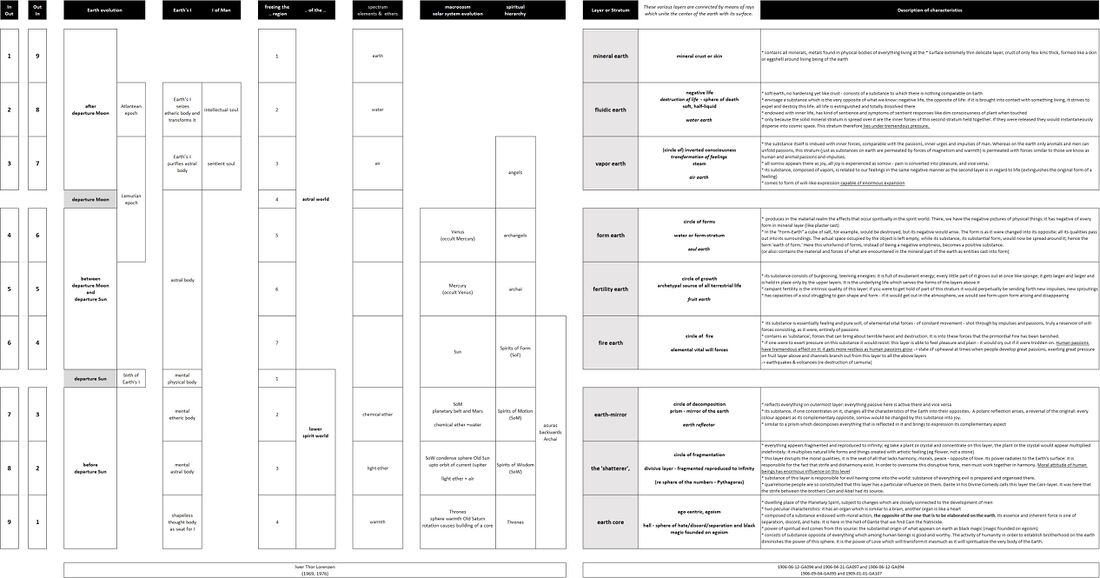 Rudolf Steiner only covered the interior of the earth in some 3 to 4 lectures in 1906. After that the next contribution came by Adolph Arenson.

Iwer Thor Lorenzen integrated all available info in a cohesive explanatory framework in his book of 1969 (as well in his last book of 1976) - see references below, and Schema FMC00.004 above.

I: And is the interior of the earth made out of that gold which comes from the hollow cavity in the sun and which is destined to return here?

Rudolf Steiner: Yes, the interior of the earth is of gold.

The kernel of the earth consists of golden fire, around which a dark girdle is cast, the smoke of the mineral realm.

.. in everything which surrounds us in the various spheres in which we live, the realm of the solid Earth, of flowing water, of air and warmth, (for a moment we will look away from the higher spheres) in all these are working Divine Spiritual Beings. These spheres do not only consist in what we call material world-forces and entities, but all these spheres are permeated by various Spiritual beings. I will therefore make a diagram to represent an important fact in our connection with the Cosmos.

Now this is the remarkable characteristic: all spiritual beings which the pre-Christian age and especially the pre-Christian Judaism imagined as standing under the guidance of Jehovah, and who were regarded by the Hebrew initiates as belonging to the realm of Jehovah, extended their dominions over the three first realms — warmth, air, water.

And so if I am to draw that sphere in the cosmos which was under the rulership of Jehovah, it is this sphere: the three upper layers.

It was really the case that the Jehovah rulership embraced the spheres of nature as we have them, with the exception of the physical-mineral sphere.

It must be quite clear to you that when in the ancient Jewish writings, reference is made to the divine, this always refers to the Jehovah sphere of warmth, air, and water. That was a deep initiation-truth of the pre-Christian age, and is even spiritually indicated in the story of creation. It is clearly expressed there, and one has merely to understand the meaning of the Bible words aright to see how this is brought to expression. Jehovah devoted Himself, so to speak, to the Earth, and formed man out of the dust of the Earth. He took that which was not his own sphere, for the forming of external man. The Bible expresses that fact quite clearly.

In the pre-Christian Jewish Initiation knowledge, it was known as an initiation-truth, that Jehovah did not form external man out of His own sphere of power, but turned to the Earth, and from out of the earthly dust which was foreign to Him, He formed that human vessel which could not come from His own kingdom. Then He breathed that which comes from Him, the animal soul, the breath. That it is which He gave forth from Himself, and it came from the three spheres over which He ruled. It is the case that the superficial Bible investigator really does not for the most part, understand what stands in the Bible at all. If one understands the Bible, one sees that it speaks with extraordinary exactitude, one only has to take those sentences quite exactly: “Jehovah formed man out of the dust of the Earth.” — That means out of the mineral sphere foreign to Him, and then He gave to that form from out of His own sphere, the breath of the soul. And so, that which lives in man as the Jehovah Outflow, is what is indicated when it is said that Jehovah breathed the living breath into man.

Note [1] - The effects of the inner layer 'the shatterer'

For reference on the Golden inner kernel in the center of the Earth in the context of the Christ, see also: