When using the word Earth we typically refer to the mineral physical sphere we live on, but just like the other planets it is also a living organism consisting of a multifold structure, from I-consciousness to the etheric planetary spheres.

As a living organism or being, a planet it has a physical and etheric body and a Spirit. Our current Earth itself is only a temporary incarnation of that Being, which previously had existed as Old Moon, Old Sun, and Old Saturn. These incarnations are called the 'planetary stages' in evolution, with corresponding Conditions of Consciousness (CoC).

The Earth is currently in a solid state: this is also a temporary condition, a cyclic state in a cosmic rhythm related to the Sun's journey through the zodiac, and the precession of the equinoxes. The earth was still more fluid and less dense some 15.000 years ago, and it will be back in a similar condition in the future. See Three dimensions of evolution to see how the Earth goes through the different Conditions of Life and Form (CoL, CoF).

The Earth organism is not just a physical mineral sphere, it is made up of Earth's inner layers as well as Earth's outer etheric spheres (see FMC00.003A and FMC00.003).

Since the Mystery of Golgotha (MoG), the Christ has become the Spirit of the Earth. At the time the blood flowed at the MoG, the astral atmosphere changed as the Christ's forces of life and chemical ethers were infused back into the Earth. See Christ Module 7 - Cosmic dimension.

Schema FMC00.003A illustrates the Earth with its inner layers or strata, and the etheric spheres girdle beyond the atmosphere.

Schema FMC00.003 provides an overview of the Earth embedded further into the planetary spheres. 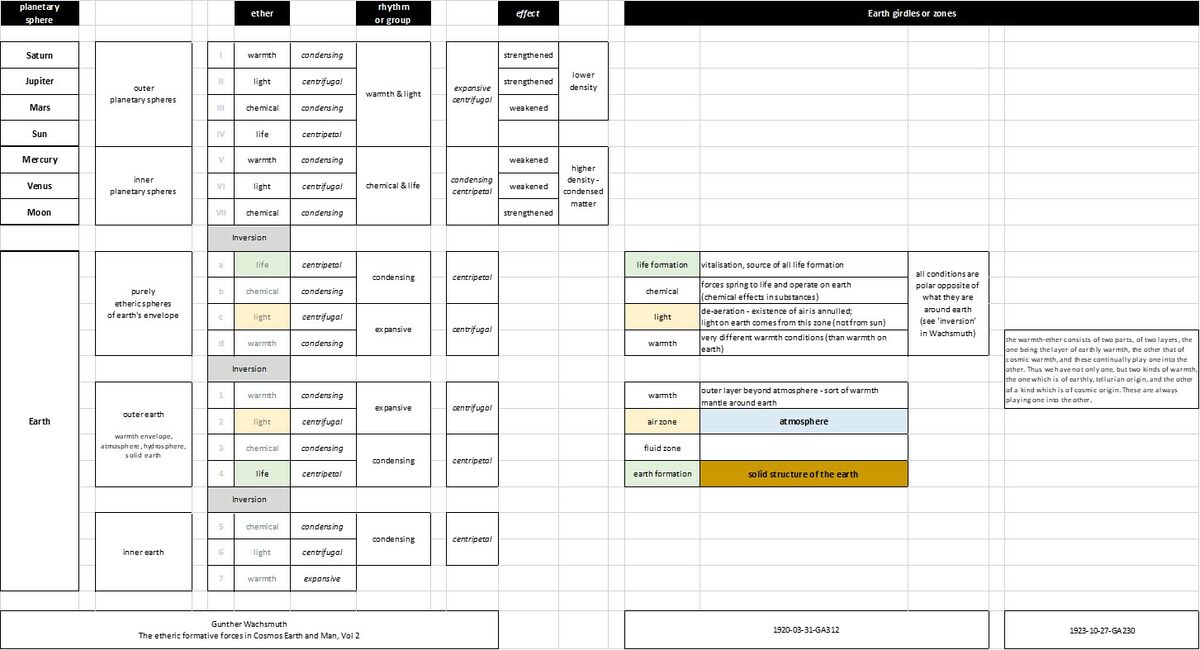 FMC00.347 is a high level world map with the predominant ethers per geographical areas (Hagemann & Wachsmuth). This is however indicative at a very high level, Hagemann published a map of the dominant mix of ethers across Europe at a more granular level. 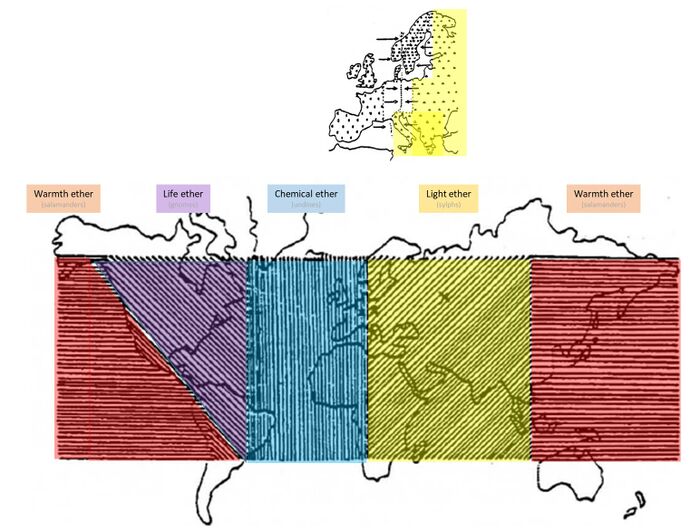 (in WSS) This lecture is of paramount importance for FMC Free Man Creator, but also for hitting the illusion of physical causality and history. So there is a link with reincarnation and the 'waves of people' and the streams and impulses that they bring forth.

[Man's belief in physical causality for what happens on Earth]

Let me give you the following illustration of what comes into consideration here. We will approach it, so to speak, from the opposite side. Here (X) is the center of the Earth.

When something takes place in the mineral kingdom, the plant kingdom, or the animal kingdom, it is a matter of seeking the causes. The causes lie at certain points which are to be found everywhere. You can picture what I mean by thinking of the following. In the region around Naples in Italy, you will find that the earth over a wide area will emit vapor if you take a piece of paper and set it alight. Vapors begin to rise from the ground beneath you. You will say: the force which drives up the vapors lies in the physical process generated by the lighting of the paper. In this case, the physical process is that by lighting the paper you rarify the air and because of the rarification of the air the vapors inside the earth press upward. They are kept down by the normal air-pressure and this is diminished by setting light to the paper. If I merely want to give an example of effects of a purely mineral nature — such as these vapors arising out of the earth — I could say for the sake of illustration that here, and here (points in the diagram), a piece of paper is set alight. This shows you that the causes of the rising of the vapor do not lie below the soil, but above it. Now these points in the diagram a, b, c, d, e, f — do not represent pieces of paper that have been set alight; in this instance they represent something different. Imagine, to begin with, that each point on its own has no significance but that the significance lies in the system of points as a whole. Do not think now of the pieces of lighted paper, but of something else which at the moment I will not specify. Something else is there as an active cause, above the surface of the earth; and these different causes do not work singly, but together. And now imagine that there are not six points only, but, let us say, 1,500 million points [Representing, approximately, the total population of the Earth.] all working together, producing a combined effect.

These 1,500 million points are actually there. Each of you has within you what may be called the center of gravity of your own physical structure. When people are awake, this center of gravity lies just below the diaphragm; when they are asleep it lies a little lower. There are therefore some 1,500 million of these centers of gravity spread over the Earth, producing a combined effect. And what issues from this combined effect is the actual cause of a great deal of what takes place in the mineral, plant, and animal kingdoms on the earth.

It is a scientific fallacy to trace back to mineral causes the forces manifesting in air and water and in the mineral realm; in reality the causes are to be found within the human beings.

This is a truth of which there is scarcely an inkling today. It is known to very, very few that the causes of processes active in the mineral, plant, and animal kingdoms lie within the human organism. (This does not apply to all the forces working in these kingdoms of nature, but to a large proportion of them.) Within humankind lie the causes for what happens on Earth.

Therefore mineralogy, botany, zoology, cannot be cultivated truly without anthropology — without the study of the human being. Science tells us of physical, chemical, and mechanical forces. These forces are intimately connected with the human will, with the force of human will that is concentrated in our center of gravity. If we speak of the Earth with an eye to the truth of these matters, we must not follow the geologist in speaking of an earth in the abstract, but humanity must be accounted an integral part of the earth. These are the truths that reveal themselves on yonder side of the threshold. Everything that can be known on this side of the threshold belongs to the realm of the illusions of knowledge, not to the realm of truth.

At this point the question arises:

What relation is there between the forces of will that are concentrated in our center of gravity, and the external, physical, and chemical forces?

Our current Earth itself is only a temporary incarnation of that Being, which previously had existed as Old Moon, Old Sun, and Old Saturn

.. if we can suppose that a flea, let us say, were to become an anatomist and were to study a bone, it would have before it an exceptionally small piece of bone, because the flea itself is so small and it would be examining the bone from a flea's perspective. The flea would then discover that in the bone we have to do with phosphoric lime in an amorphous condition, with carbonic acid, lime and so forth. But our flea anatomist would never come to the point of realising that the fragment of bone is a small part only of a complete skeleton. Certainly, the flea jumps, but in studying the tiny piece of bone he would never get beyond it.

Similarly, it would not help a human geologist or mineralogist to be able to jump about like a gigantic earth-flea. In studying the mountain ranges of the Earth, which in their totality represent a skeleton, he would still be working on a miniature scale. The flea would never come to describing the skeleton as a whole; he would hack out a tiny piece with his little hammer. Suppose this were a tiny piece of collar-bone; nothing in the constituents of the little piece, carbonate of lime, phosphate of lime and so on, would reveal to the flea that it belonged to a collar-bone, still less that it was part of a complete skeleton. The flea would have hacked off a tiny piece and would then describe it from his own flea-standpoint, just as a man describes the Earth when somewhere — let us say in the Dornach hills — he has hacked out a bit of Jura limestone. Then he describes this bit, and works up his findings into mineralogy, geology, and so on. It is still the same flea-standpoint, though certainly somewhat enlarged.

This, of course, is no way to arrive at the truth. We need to recognise that the Earth is a single whole, most firmly consolidated during winter through its salt-formation, its mercurial formation and its ash-formation. Let us then ask what the whole nature of the Earth signifies when we look at it not from the flea's point of view, but in relation to the cosmos.

describes how the forces of Pisces and Virgo have a impact on doing Good, whereas adverse forces will - in the future - try to use the mid-night forces of Sagittarius.

Those concerned to present an Anti-Christ as the real Christ will try also to make use of something that works through the most material forces, but in this very way can work spiritually. Above all they will strive to make use of electricity and earth-magnetism in order to produce effects all over the world.

I have shown you how earth-forces rise up into what I have called the human Double, the 'Doppelgänger'. This secret will be opened up. An American secret will be to make use of earth-magnetism, with its north-south duality, and by this means to send over the earth guiding forces which will have spiritual effects.

Look at the magnetic chart of the earth and compare it with what I am now saying. Observe where the magnetic needle deviates to East and West and where it does not deviate. I can give only hints about all this.

An etheric map of Europe was made by Ernst Hagemann.

is called 'geographic medicine' and explains how the human etheric double is the origin of organic illnesses, see Illness

A certain portion of the earth's surface shows the closest kinship to these forces. If a person goes to this place, he enters their realm; as soon as he goes elsewhere, he is again outside their realm. For these forces are geographic; they are not ethnographic, not national, but purely geographic forces. There is a region where the force streaming up from below has the most influence on the double, and where, because with the outstreaming forces it enters most into kinship with the double, it is again imparted to the earth. This is the region of the earth where most of the mountain ranges run, not crosswise, from east to west, but where the ranges primarily run, from north to south (for this is also connected with these forces) where one is in the vicinity of the magnetic North Pole. This is the region where above all the kinship is developed with the Mephistophelian-Ahrimanic nature through outer conditions. And through this kinship much is brought about in the continuing evolution of the earth.

This topic will be developed regarding effects of nature such as thunderstorms and extraordinary weather conditions and how they are understood and to be explained. Mineral science uses physical causality and a materialistic mechanical explanation. Spiritual science connects these to the etheric formative forces in Man and working from humanity at large on Earth.