The 'Mothers' is a term from the ancient Mysteries, that appears in Plutarch and Goethe's Faust.

The plural Mothers is an expansion of the term we know on Earth today as the mother of a child or mother Nature, both referring to the physical material.

Mothers refers to the forces, and the corresponding planes or worlds of consciousness from which the creative forces are generated, that underlie the kingdoms of nature. These forces have a relationship to their development during the previous planetary stages, but they still work in nature on Earth today. Hence we have three mothers of the different kingdoms and worlds.

In each of the three worlds (astral, lower spirit and higher spirit world), can be distinguished: a) the formative forces of The elementary kingdoms, and b) the consciousness of the group soul of a corresponding kingdom of nature (animals in astral world, plants in lower spirit, and minerals in higher spirit world). See Schema FMC00.175A.

In practice, the world around us is thus the result crafted by interpenetrating forces that are all working together at the same time, and these are the Mothers of creation.

In Greek culture Rhea, Demeter and Persephone were three world-mothers. Rhea was mother of Demeter, Demeter mother of Persephone. As such one can relate them to Old Saturn, Old Sun, and Old Moon, as every next planetary stage is given birth as the result of the previous one. Each of these stages of evolution brought the development of new higher ethers and lower elements from the corresponding strata in the higher worlds.

In literature references, the term Mothers is a broad concept and hence once one knows what it means, one should not get confused that it can be used to reference one of the aspects above, such as the layers of the spirit world, or the force.

Schema FMC00.030 shows the three main forces of nature, related to the formative etheric forces corresponding to the three previous planetary stages of evolution, and still working through on Earth.

Compare with Schema FMC00.142A: light in the sub-material state is electricity and corresponds to the astral and EK3. The other two forces map to the lower and higher spirit world and EK2 and EK1. The second force, known by the Atlanteans as Tao, and now more popularly known as Vril, is indeed the growth force of nature.

Schema FMC00.175A is a simplified variant of Schema FMC00.175 that summarizes the formative forces proceeding from the Elementary Kingdoms, all three active and interpenetrating all the time. They work together with the intelligence of the group soul from the different worlds. 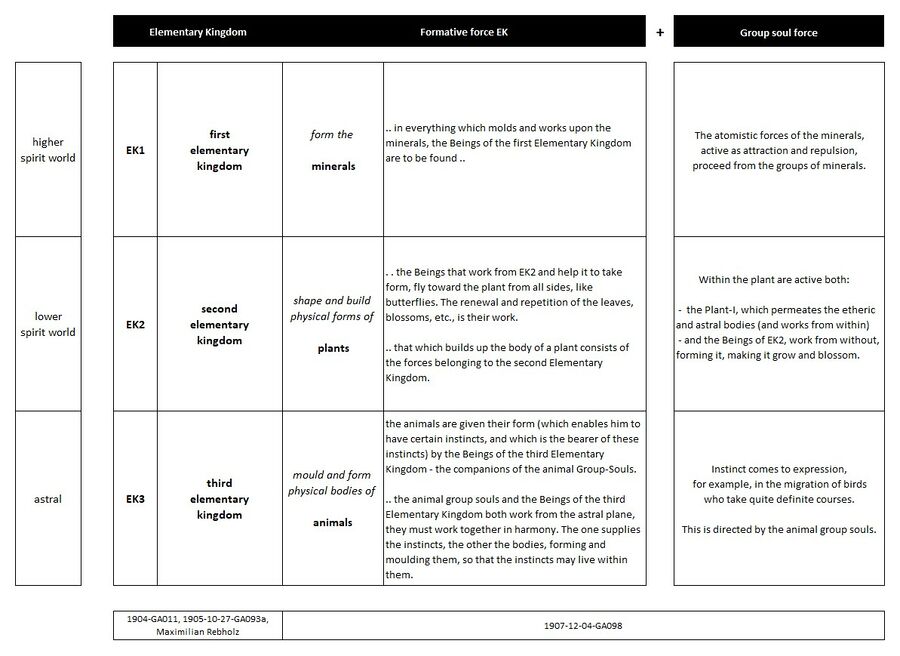 the story of Nikias, who wanted to make subject again to the Romans a certain town in Sicily belonging to the Carthaginians, and on that account was being pursued. In his flight he feigned insanity, and by his strange cry: “The Mothers, the Mothers are pursuing me!” it was recognized that this insanity was of no ordinary kind. For in that region there existed a so-called “Temple of the Mothers,” set up in connection with ancient Mysteries; hence it was known what was signified by the expression “the Mothers.”

The next higher sphere hosts the beings called dynamis. They have not only the power of thought but also the power to be a source of thought; they are beings that have the seeds for thoughts. Compare the exusiai with flowers. Now imagine a seed that is transparent, bright, and clear, but also has the power to become a flower. Thus through these beings a seed of thought can be formed; and then from the other side, the entire thought can be built into the akasha; that is the sound, so to speak, of the entire fabric of the world.

As Goethe described this in Faust, this is where forms are created, where the mothers sit on their thrones in loneliness and work at their glowing tripod.

The beings we call kyriotetes sound forth in the highest kingdom. Only the most highly developed human beings can gain even a brief glimpse into this kingdom. Everything is harmony and unity there; all exception has disappeared.

The exusiai, the dynamis, the kyriotetes are the three highest kingdoms in which human abili­ties are completely free. These are the kingdoms we enter in the time between two incarnations in order to find forces from what lies on the other side, for work we must do on this side of world existence. What happens on this side of existence, what we do ourselves, this is the world of results, the world of action. New forces for existence flow to us from the world of causes when we return to a new incarnation. Everything that we do in this world, that rises into our soul as moral ideals, as ability to work creatively, as daily love for fellow human be­ings, everything that occurs to us for mastering the forces of nature in technology, all this resides hidden deeply in the human soul. The soul brought it from the kingdom of higher devachan, where the ini­tiatives for work on this side of the threshold are found.

At the fourth stage of Devachan, the archetypes of things arise — not the ‘negatives’ but the original types. This is the laboratory of the Cosmos wherein all forms are contained, whence creation has proceeded; it is the home of the Ideas of Plato, the ‘Realm of the Mothers’ of which Goethe speaks in Faust in connection with Helena. In this realm of the spirit world, the Akashic Record of Indian philosophy is revealed. In our modern terminology we speak of this Record as the astral impression of all the events of the world. Everything that passes through the astral bodies of men is ‘fixed’ in the infinitely subtle substance of this Record as in a sensitive plate.

is the main lecture

That which received the metal was called the Mother. The most important of these earthly substances which, as it were, came forward to meet the heavenly metal-element in order to take it up were called “the Mothers.”

That is only one aspect of “The Mothers” to whom Faust descends. He descends at the same time into those pre-earthly periods of the earth, in order to see there how the Mother-earth takes into herself what is given by the Father-element in the cosmos.