The four elements of warmth (or 'fire'), air, water and earth denote the spiritual substance created in the planetary system in previous planetary stages of evolution, together with the higher ethers. Each combination of a lower element and a higher ether arose from the sacrifice of spiritual beings who had reached a certain level of consciousness, whereby the sacrificed their lowest principle and emanated substance. See FMC00.225 and GA132.

The elements and higher ethers belong togther, see Spectrum of elements and ethers, and are coupled by the etheric formative forces coming from the the elementary kingdoms (EK). How this hangs together is described in the Golden Chain, see Overview Golden Chain.

Schema FMC00.225 is a summary of the GA132 lectures that sketch - in imaginative pictures - the spiritual principles underlying the appearance of the elements and ethers. These principles (sacrifice, bestowal, renunciation .. ) and imaginations provide deeper meaning and understanding of the 'philosophical principles' of the elements and ethers, i.e. the working of the spiritual hierarchies. See 1911-10-31-GA132 to 1911-12-05-GA132.

Schema FMC00.300A shows the four elements: in the middle the original BBD by Rudolf Steiner, right a chalk drawing by one of the stenographers attending the lecture, and on the left a digital version in English.

Schema FMC00.300B shows the diagram by Rudolf Steiner as compared with Rawn Clark's version of the 'tetrapolar magnet' and the two 'electric and magnetic fluids' in IIH (as taken from A Bardon Companion). The diagram from 1923-12-27-GA233 (see Schema FMC00.300A was rotated and mirrored to get the same layout, and colours were added). See also and compare with The two etheric streams

FMC00.149 gives a tabular synthesis of solar system evolution, showing the development of the Spectrum of elements and ethers and the development of our current Four kingdoms of nature, as well as Man's developing Condition of Consciousness.

FMC00.324 is an illustration from 'Secret Symbols of the Rosicrucians' (1780s), showing the four elements and the converging triangles on the left, and the relation with polarity: creating make and female from the Sun and the Moon. See also The two etheric streams 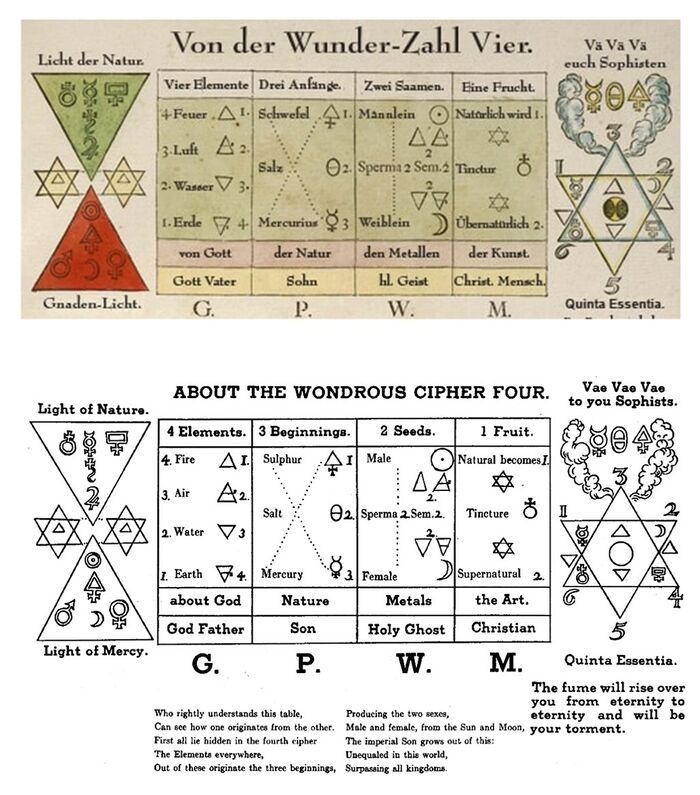 FMC00.194 shows how during the preceding planetary stages (and recapitulations on Earth), the elements and ethers were created, in a way that the spiritual hierarchies all remain present in the totality of the whole spectrum of elements and ethers. See also Schema FMC00.193 on Sacrifice.

Empedocles possessed a modern spirit, but at the same time he was initiated in many different mysteries. He was clairvoyant to a high degree. Let us now imagine vividly that his modern way of thinking made him feel inclined to consider the world from a materialistic aspect; he has, in fact, drawn up a materialistic system which describes the world more or less from the stand point of a modern materialistic chemist, namely, as a combination and separation of elements. The one difference is that Empedocles distinguishes only four elements. He thought that various beings arise according to the way in which these four elements combine. As a result of these thoughts he felt the strong desire to discover in a true and real way what lies behind these material elements, what air and water really contain. If we peruse the Akasha Chronicle today and look into water, air, fire and earth we shall discover in them etherically the Christ. Empedocles could not find Him, but he felt the tremendous impulse to discover something in air and water, fire and earth, to find out what they really contain.