Ahrimanic beings and their influences

General positioning: Spiritual beings evolve along a normal developmental line, but as in any population there are cohorts that lag behind or develop ahead. The Luciferic beings developed from the Old Sun planetary stage onwards, see Schema FMC00.019, and play a key role in the development of Mankind. A polar opposite counterimpulse of the Luciferic stream and beings are the Ahrimanic beings.

In the solar system upto the higher spirit world, we have the normally developing spiritual beings, but also Luciferic, Ahrimanic, and Asuric beings. Together they constitute what is called evil with its many faces: the chance to err, lie, do harm, etc. On the higher budhi and nirvana planes evil does not exist.

Man is the battleground between the above mentioned classes of beings, and hence Man is torn between the Luciferic and Ahrimanic paths of development, or the right balanced development represented by the Christ.

Schema FMC00.296 illustrates how we can relate Luciferic and Ahrimanic influences to our life of the soul and the 'I' attitude which we stand in life. In today's world and an age of self love and egotism, people focus on their rights .. and are bound to fall victim of many 'must-do' duties. This can be seen as a polarity Luciferic (self-love, individual focus) and Ahrimanic (working without true or deeper soul engagement). When we are able to stand above our egotism, cool this fire and accept what comes, and we instead we work with inner fire and love our duty truly from an inner soul warmth, we redeem Lucifer. We transmute him from the Luciferic tendency to one of selfless love, a loss beyond our own I. 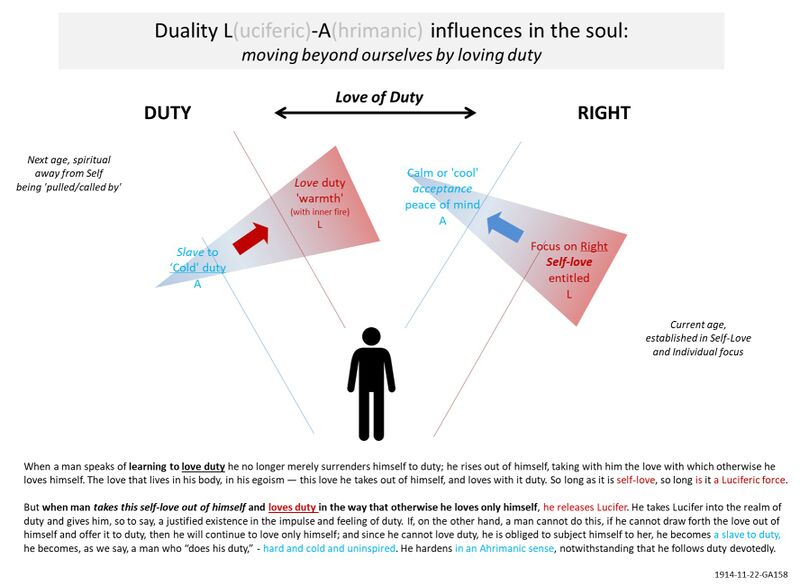 We have heard that when man breaks through the veil of nature and penetrates into the world lying behind nature, he encounters Ahrimanic beings, beings intent upon destruction. In the World Order these beings are bitter enemies of man's earthly nature, so that if, through weakness, he allies himself with them — and this is possible, as I have indicated — he is allying himself with the enemies of man on Earth. That is a fact, and a certain relationship existing between the human being and the Cosmos does much to promote such an alliance.

These beings behind the veil of nature are highly intelligent. I have spoken of human intelligence, but these beings have their own kind of thinking and intelligence; they have feeling, although it is different from human feeling; they also have will, although it, too, is different from human will. They perform certain deeds which come to expression outwardly in manifestations of nature, but the essential substantiality of which lies behind the veil.

Now there is a remarkable affinity between something in man and the highest faculties of these beings. I will make this clear in the following way. When man crosses the Threshold of the spiritual world and approaches these beings, it may seem to him as if he were entering a veritable inferno, or whatever he conceives it to be. What matters is that he shall understand the experience aright. What will strike him most forcibly is the remarkable intelligence of these beings. For they are extraordinarily clever, extraordinarily wise. Their faculties of soul come to expression in this cleverness. But the soul-forces, the higher forces of these beings are all related to the forces of man's lower nature. Sensuous urges in man are, in these beings, the very forces which strike one as so significant. Thus there is a relationship between the lowest forces of man and the highest forces of these spiritual beings. That is why they strive to identify themselves with the lower forces in man. When a man enters this other world, instincts of destruction or hatred, or the like, arise in him, because these beings draw up what constitutes man's lower nature to their own higher nature, and with their higher forces work through man's lower forces. Nobody can ally himself with these beings without debasing his own nature, without greatly enhancing the strength of certain sensuous urges and impulses.

This is a fact of which special account must be taken, for it shows us unambiguously how we must picture our relation to the Cosmos. In our own human nature there are lower urges and impulses. But these lower urges are forces which represent lower impulses only in us, as human beings. These same urges are, in these spiritual beings, higher forces. But these beings are working all the time within us. They are always there within our nature. Our progress in Spiritual Science depends essentially upon our recognising them, knowing that they are there. This enables us to say: we have our higher forces and we have our lower forces, and, in addition, those forces which in us are lower forces but in these spiritual beings are higher forces. — This expands the duality of our higher and lower forces into a triad. We are already at the border of the Threshold of the spiritual world when, instead of the duality of our higher and lower forces, we recognise the triad.

Now as I said, in our age it is impossible to adopt the method employed by Father Antonius in dealing with Paul the Simpleton; it is also impossible to do many things in the way certain Orders have been wont to do them. — It amounts to this: the knowledge in its old form cannot be used. For if it were thus presented to men, it would bring about exactly what I have been speaking about. It would without any doubt arouse lower instincts in them.

For example, there actually exists in the world an Order which leads men to knowledge of these mysterious beings without any preparation. In all such men, instincts of destruction are aroused, so that this Order is actually responsible for sending human beings with destructive instincts out into the world. In a passage in one of his writings Nietzsche hinted at the existence of this Order without knowing the actual circumstances.

Hagemann on "Activities of ahrimanically influenced elemental beings in technology"

In the previous section, we became acquainted with elemental beings who are necessary servants of the creator powers in the realm of birth and death, and who also have the task of developing technology and of leading our modern civilization to its destruction. The following shows the manifold ways in which these elemental beings work in technological processes. A three-stage process is involved here. In the first stage, the raw materials which are necessary for technological processes are torn from their natural surroundings and broken down. Rudolf Steiner describes this as follows.

"When we break up nature, beginning with minerals, we bring about a certain feeling of pleasure on the part of the spiritual elemental beings in it...In what occurs, the important thing is that we drive the elemental spirits which belong to the sphere of the regularly progressing hierarchies out of the kingdoms of nature which they hold together. There are elemental ("very useful") spiritual beings everywhere in nature. When we disintegrate nature, we press the spiritual kingdom of nature-spirits out of it. This is what is continually happening during the first stage. We break up and pulverize material nature and thereby free the nature spirits. We lift them out of the sphere assigned to them by the Jehovah gods, into a realm where they can flutter around freely, where they are no longer bound to their original assigned dwelling places. Therefore we can also call this first stage the expulsion of the nature spirits.

In the second stage we put together again what we have taken from nature and broken down, in accordance with the laws we have discovered. When we make a machine or a complex of machines from raw materials, we plant certain spiritual beings in the thing we construct. The thing we make is by no means devoid of spirit.

At the third cultural stage, we could say that the effect technology has on us is that we stuff ourselves full of ahrimanic spirits - we really stuff ourselves completely with them. This is how it looks from the inside. Now if we turn away from this occult side of modern life and look back to the days when a human being slept in such a way that he was only separated from nature by walls permeable to the spirit, when he worked in nature during the day in contact with the regular spirits from the Jehovah hierarchy, we have to say that at that time, human souls-the I and the astral body-brought spiritual things from nature into their physical and etheric bodies, which had a stimulating effect on their inner soul life. This is becoming increasingly rare today"(2994)

In the following words Rudolf Steiner describes the experiences of our I and astral body during sleep in a moving motor vehicle, and how these experiences are brought back in a befuddling way into our physical and etheric bodies upon awaking.

Rudolf Steiner elaborates on this theme as follows:

A few years later, Rudolf Steiner made the following comments on this same theme.

Finally, we have indications by Rudolf Steiner about the ahrimanically influenced elemental beings who will become increasingly active in technology, and the fact that the "very useful" elemental beings will lose their particular connection with plant growth.

Moreover, people who wish to take over Christ's sphere of influence will actually call this Ahrimanic being 'Christ'. It will be essential to learn to distinguish the true Christ, who will not appear again in the flesh, from this other being. This is a very real battle, not an affair of abstract ideas - a real battle to set another being in the place of Christ for the whole of the rest of the Postatlantean epoch, some 6000 years.

It depends on how human beings are prepared, whether they can resist this. Many people will in any case scoff at the whole idea of such an incarnation, which is just one of the means Ahrimanic powers use to hide the reality. It helps to know the means through which he works. One is the mathematical-mechanistic illusion of the universe held by science. Another is to foment everything that breaks people into small groups, especially the impulse towards nationalism. But his best means of triumph is to believe the half-truth that the Gospels give the whole of Christianity.

When Ahriman does incarnate, he will, if not prevented, establish a great occult school which would make people magically into seers, though prematurely and without the effort otherwise necessary. But the clairvoyance of each person would be different, confusion would prevail, and constant strife would be inevitable. People could survive, but all culture would be overthrown.