An in depth study of the life and work of Rudolf Steiner shows that his core mission was to bring humanity the renewed teachings of reincarnation and karma. For example see the book by Thomas Meyer: "Rudolf Steiner's Core Mission: The Birth and Development of Spiritual-Scientific Karma Research".

From various studies (see a.o. Luigi Morelli) we see how Steiner wanted to center his lectures and teaching on the theme of karma as of 1910, but the audience was just not receptive.

As of January 1924 however, Steiner started his series of Karmic Relationship lectures. In the next nine months until his death he would give over 80 lectures on karmic studies. And to the surprise of his audiences, he now started using concrete case studies of known personalities which he named, described biographically, and for whom he also sketched previous incarnations and karmic background. Overall Steiner described about 50 different individualities.

Study of Steiner's lectures shows that quite a number of the personalities described in the 1924 KR were already covered by Steiner before in lectures from 1905 onwards, and that he already was touching on bringing the 1924 materials in the period 1910-1912.

It is important to mention that Steiner gave specific descriptions as to how do biographical research in the context of karmic studies, and not only hinted at this but also asked some of his students to pursue specific cases. As a result, the individualities described have been subject of extensive study and a wealth of secondary literature exists on many of them.

We can say we have some 60 individualities and a wealth of qualitative study materials to learn from. The question becomes: what are the implicit learnings in that material, how to extract, deduct them and how to use them.

Schema FMC00.241 as an example of a structured table, made on the basis of listening to KR lectures in chronological order. 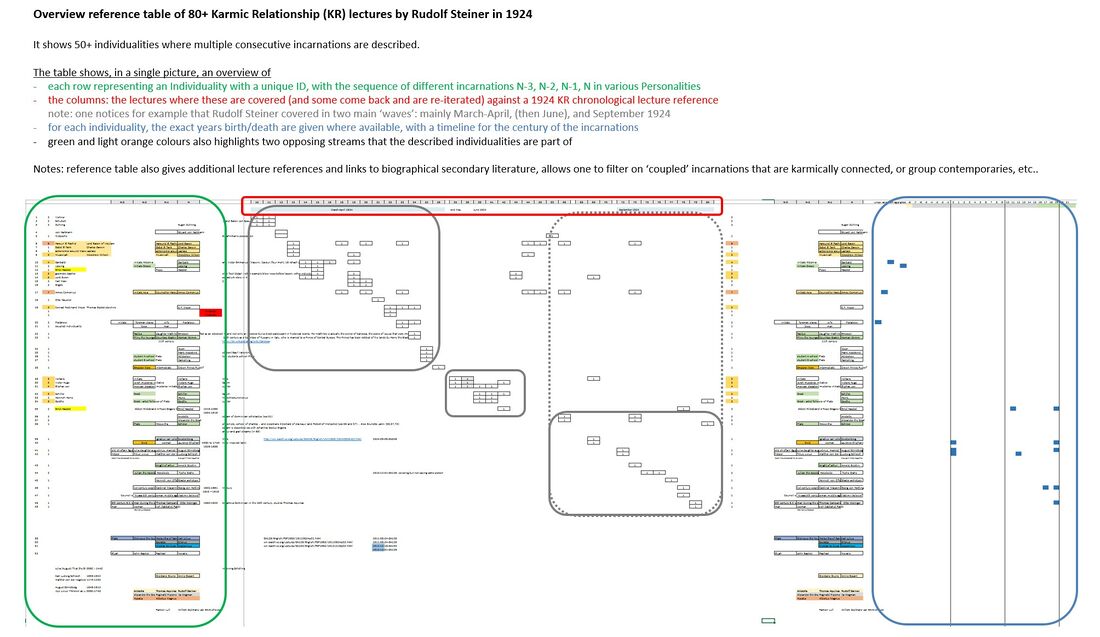 Schema FMC00.241A provides a reference to the Individualities (KRI) and the Karmic Relationship lecture number (KRL)

Schema FMC00.265 provides the reference used for the Karmic Relationship Lectures with a unique KRL number ordered chronologically. Notice the KR cycles mix this logical chronological order. A few extra lectures from other cycles were added because they cover related subject matter.

KR numbers are the chronological lecture numbers as part of the Karmic Relationship lectures, as per FMC00.241 above. The schema illustrates 'human encounters' of important Individualities in a certain timeframe (peaking 1780-1800) and geography (Weimar, Jena).

It also illustrates the 'Impulses from waves of reincarnation souls'. Click the image to enlarge. 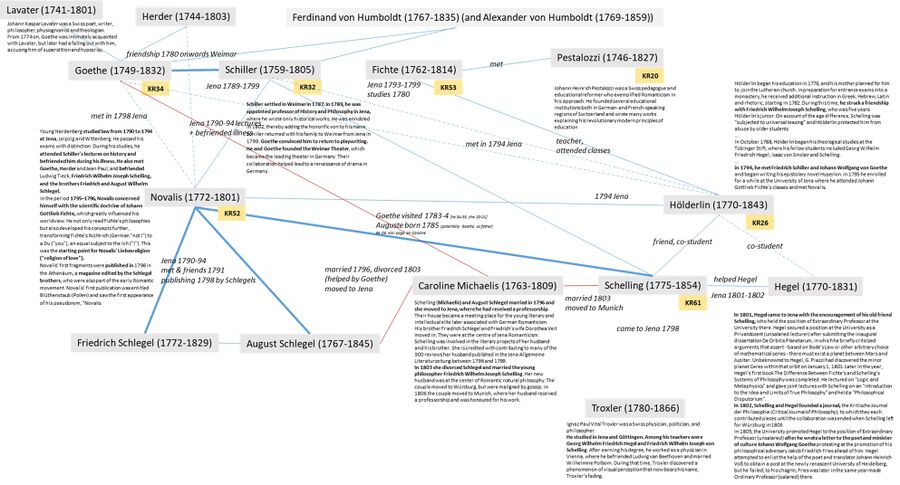