The human heart plays a central role in Man and a deep understanding is required both for understanding of Man, as for the Christ Impulse. The heart is not a 'pump', but is an organ solidified from etheric currents by the blood circulation.

Study from various perspectives can shed light on:

Schema FMC00.279 depicts - on the right - the statement from 1906-09-20-GA091 - see Mystery of the heart. The heart is the center of Man where the twelve zodiacal flows stream in, and they stream out through the head similar as with Earth. On the left, an illustration of the etheric (prana) streams taken from Dr. Stone's polarity theory, and a comparative illustration of Earth's outstreaming on the pole.

See also: Etherization of blood and the Kundalini

Schema FMC00.180 (from Olive Whicher) shows an etheric perspective on the heart (left), connecting it with the image of 'Man as an inverted plant' (right - see also Schema FMC00.110 on Man as a threefold being ). The middle drawing represents the area between two focal points with the heart above and the brain below. See also: Etherization of the blood 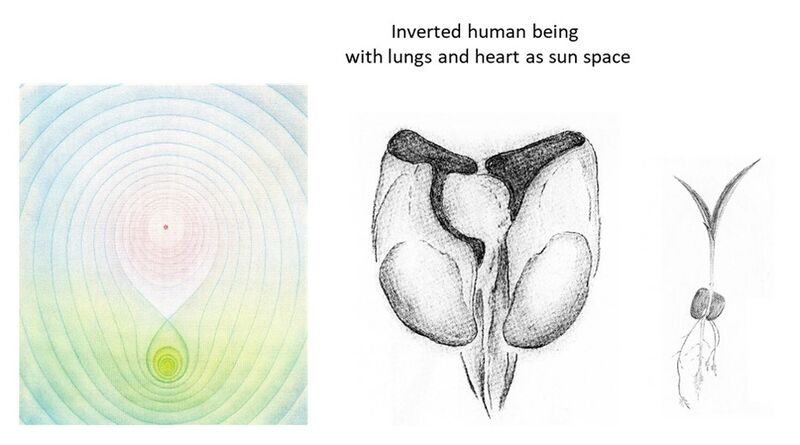 makes the link between the organ of the heart, and the formative forces that created the lion

In Man there is to be found a kind of extract of all the rest of nature, of all materials and forces. If you study the nature of any plant deeply enough, you will find that there is contained in the human organism something of the same, even though it is there in ever so small a measure. If you study an animal, you will always be able to point to something in it that is of like nature in the human organism. In order to understand this rightly it is, of course, necessary to consider the development of the world from the occult standpoint. The occultist knows, for example, that men would not have the kind of hearts they have today if the lion did not exist out there in nature. Let us look back to an earlier time when there were still no lions.

Men, the oldest beings, already existed but at that time they had a differently constituted heart. To be sure, everywhere in nature there are obscure relationships. When, in the far remote past, the human heart acquired its present form, the lion appeared. The same forces formed both. It is as if these forces had extracted the leonine essence and with divine artistic skill fashioned the heart from it. You may feel that the human heart has nothing leonine in it; that it does is nevertheless so for the occultist.

You must not forget the fact that when something is introduced into the relationships of an organism, it will then function quite differently from the way it functions when it is free. Conversely, it can be said that were you able to withdraw the essence of the heart and form a being from it that corresponds to this heart - that is, a being formed in such a way that the forces of the organism did not determine its structure - you would then produce a lion. All the traits of courage and daring, or, as the occultist says, the kingly traits of the human being, are derived from connections with the lion. The initiate, Plato, also placed the kingly soul in the heart.

Here Rudolf Steiner speaks of the former inner, dynamic connection between the human etheric head and the physical head which still existed during the period when Greek culture was at its prime. This extract is taken from Kirchner-Bockholt 'Rudolf Steiner's mission and Ita Wegman.

[As time goes on, something similar happens in the case of other organs. The disconnection of the heart]

"has a very significant result in man's evolution".

[The increasing scienti­fic materialism is mentioned in connection with the processes taking place in man's organic system. As long as the natural connection existed, a relation to spiritual worlds and the spiritual forces behind Nature was always maintained. What had formerly been a natural endowment must today be sought for along different paths.]

This etheric heart that has been released from the physical heart will acquire its true relation­ship to the spiritual world if the individual concerned seeks for spiritual know­ledge, for spiritual thoughts with an anthroposophical orientation.

which will develop only a naïve relationship of feeling to the spiritual world—such belief materialises the heart of humanity, leads to material­istic culture in a domain usually unrecognised.

in 'The signature of zodiacal and planetary forces in Man' (March-April 1929, published in 'The Mysteries')

The human heart in its four chambers presents the form of a tilted-lying cross, which is the ancient semitic letter for the T-sound. Rudolf Steiner also indicates that to clairvoyant sight the Sun appears divided into four chambers, so that the Tao is also inscribed into the Sun. As as streams flow from the heart towards head and lungs, streams from the Sun also run towards the Moon and towards the Earth. So in Man, relationships exist between his brain and the Moon, between his lungs and the Earth, and between his heart and the Sun. He bears within himself an inner Earth, inner Moon and inner Sun. In ethusiasm this inner Sun rays outwards. As Rudolf Steiner indicates, this raying outwards, this striving apart into all spational directions from a central point ... is also stimulated as a picture the moment one inwardly strikes the T-sound. This refers us to a further relation existing between the heart and the zodiacal forces of the Lion, which work through the T-sound.