Mystery of the Heart

The Gospel of John describes (13:23-25) how - at the Last Supper - the apostle Lazarus-John was lying against Christ-Jesus and raised himself from the bosom to the breast and heart region of Christ Jesus ('one of the disciples rested upon Jesus' bosom').

The Mystery of the Heart is the deep symbolic meaning that lies contained in this line and image, as illustrated by Schema FMC00.099 below.

This symbolizes the higher etheric forces of the Christ Impulse raising from the Earth spirit and ennobling the heart, points to the human heart as the future organ of development, as well as the leaving behind of the lower principles of Man (symbolized by the lower chakras) towards the higher principles. See also the Lord's Prayer.

If Christ be born in Bethlehem a thousand times and not in you, you remain in eternal perdition.

meaning that clearly the Mystery of Golgotha is not a historical physical event, but has to be taken very personal and is all about how it will impact every individual human being.

In the heart we see three things coming together, a blood circuit with the brain and all sense impressions (and related thinking) that are being absorbed and worked in the human being, a blood circuit with the metabolic organs and physical matter (food stuffs) that are converted in the human being, and in the middle the breathing system with the lungs that balances both with the famous rhythm between breathing and blood pulse (seo heart rhythm) .. in a nutshell we see the essence of Man as a threefold human being not just symbolized but operating in the blood (and I-organization) and coming together in the heart .. not surprisingly then also seen as the center and karma recorder in lectures so and so

.. in the above we should not forget to see the human being not just as a physical being breathing air through the lungs, but a microcosmos connected and integrally part of the macrocosmos, breathing through its skin pores and higher bodily principles (etheric, astral bodies and I organization) and taking in also the higher ethers in the finer breathing process

one cannot understand the mystery of the heart without deep knowledge of the threefold human being - imagination of how Man stands between past and futurethat is because the heart connects the two blood circuits of the two extreme pulsating systems, and the middle rhythmic system balances thisnow into this heart with two blood circuits and sensory inputs from the nervous system above, and the metabolic process below .. is 'infused' the breathing system .. however this breathing is more than just air

now contemplate this picture and realize that when the apostle rises from the lap to the bosom, the lap is the lower part of the human being .. reflect back on lemurian times when this was the animal lower part of Man, as we also find it back in the Centaur

Schema FMC00.099 gives illustrations of the specific scene at the Last Supper where John puts his head to the heart of Christ-Jesus.

A wealth of illustrations exists in old paintings and icons. Hereby a broader selection of imagery in FMC00.099A: 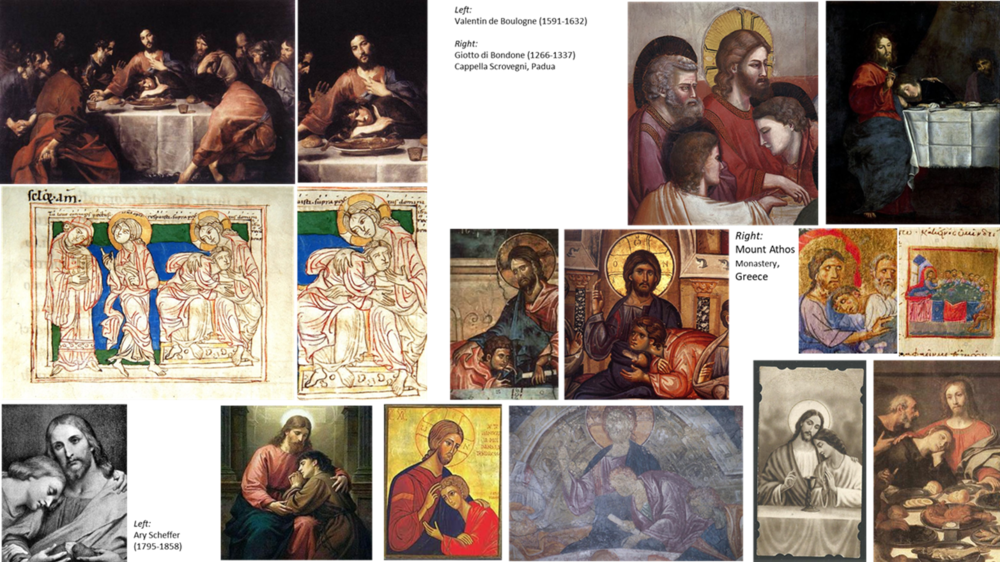 Schema FMC00.279 depicts - on the right - the statement from 1906-09-20-GA091 (re extract reference below). The heart is the center of Man where the twelve zodiacal flows stream in, and they stream out through the head similar as with Earth. On the right, an illustration of the etheric (prana) streams taken from Dr. Stone's polarity theory, and a comparative illustration of Earth's outstreaming on the pole.

At the beginning of the sixth epoch an influence will have developed, not in higher spheres, but in the sphere of the present-day conscious mind; in the fifth epoch this influence is still in its infancy, but it is nevertheless already developing. It is something which emanates from the musical element. For the fifth epoch music will be not merely art, but the means of expression for quite other things than the purely artistic. Here is something that points to the influence of a specific principle on the physical plane. The most significant impulse by those directly initiated in the fifth epoch will, to begin with, be given solely in the sphere of music. What has to flow in is not astral, but it is something of great significance in the sphere of the mental life of the fifth epoch. It is something that the human intelligence will come to recognise as important, something which has been called the Kundalini fire. It is a force which today still slumbers in man, but which will gradually gain more and more importance. Today it already has a great importance upon what we perceive through the sense of hearing. During the further development in the sixth cultural age of the fifth epoch the Kundalini fire will acquire great influence on what lives in the human heart. The human heart will really have this fire. At first this seems to be mere symbolism but man will then really be permeated by a force which will live in his heart, so that during the sixth epoch he will no longer make a distinction between his own well-being and the well-being of the whole. So deeply will man be permeated by the Kundalini fire! He will follow the principle of love as his own innermost nature.

Note: the expression ‘Kundalini fire’ is used by Rudolf Steiner in the first edition of his book Knowledge of the Higher Worlds. In later editions he replaced the term by another term which is translated in the 1937 English edition as “the spiritual perceptive force in the organ of the heart”.

The purified energy goes up to the heart which will be the organ for bringing things forth in the spirit in future. This can already be seen in the anatomy of the heart. The heart is an involuntary muscle and therefore should have smooth fibres. But it does not; it is striated the way voluntary muscles are. It is thus already pointing to a time when it will be a voluntary muscle.

The heart is the center in Man that supplies Man with the life forces, it is an image of the various world streams. and aligns itself with the order of world rhythms.

Note: after the lecture of 1906-09-22-GA091 a question is formulated but no answer is logged. The question formulation also relates to the link between the heart and the twelve zodiac signs and the influence of the seven planets, and the heart as the Sun, with - and this is the remarkable part - four physical chambers and three astral chambers (...). And how the process of inflow and outflow of cosmic streams is similar for the atom, the heart, and the earth. The previous days Rudolf Steiner had covered the atom (1906-09-20-GA091 and used the Force substance representation language which is used in these lectures also.

Human perfection consists in the falling away of the lower soul-forces, so that only the higher forces remain behind; in future, man will no longer have the lower forces; he will, for example, no longer have the forces of procreation. John's soul-power above all will raise those lower forces to the loving heart. It will send out streams of spiritual love. The heart is the most powerful organ, when Christ lives in man. The lower soul-forces are then raised from the abdominal regions to the heart.

Every initiate experienced this in the Mysteries of the heart. It re-echoed in the words: “My God, my God, how thou hast raised me!”

One of the disciples rested upon Jesus' bosom, he rested upon Jesus' heart. This means that all the lower forces, every form of egoism, will be raised to the heart. At this point Jesus repeated to his Disciples the words: “Eli, Eli, lama sabathani” — “Now the Son of Man is glorified, and God is glorified in Him!

Afterwards he said: “There is one among you who will betray me.” This is brought about by the power of egoism. But as surely as this power of egoism is the source of treason, so surely will this lower soul-force be raised to a higher stage.

John's very power of soul will have brought it about that those powers are then lifted up into the loving heart. Rivers of spiritual love will flow from it. When the Christ is in us, the heart is the organ which is most powerful in us. The lower power of soul will then have been raised from the lower abdomen to the heart. Every initiate experienced this as the mystery of the heart. It came to expression in the words `my God, my God, how you have raised me up high!

Note the special role of John in this context. The lecture goes on to talk about the baptism and John standing at the cross, that Christ-Jesus transferred his wisdom to John:

Quote: "The text should thus be read to say:`By the cross stood Sophia, the mother of Jesus.' He spoke to this mother, saying: `Woman, this is your son.' He had himself transferred the Sophia who had been in him to John. He made him the son of Sophia, saying: 'This is your mother.' From now on you must acknowledge divine wisdom to be your mother and dedicate yourself solely to her.' What John has written was this divine wisdom, Sophia, embodied in the gospel of John itself. He received the knowledge from Jesus himself, and was authorized by the Christ to transfer the wisdom to the earth."

Recall (a) the paintings with not two but three babies [Raphael's Terranuovo Madonna], and (b) the story in the Bible whereby Mary goes to visit Elizabeth, and the recognition of two souls in womb both mothers (ps Mary remains with Elizabeth until the birth of John). Then also (c) the fact that in Christian Rosenkreutz was incarnated the individuality of Lazarus-John being the writer of the John Gospel, that this individuality incarnes every century, and brings souls to this knowledge (

John's very power of soul will have brought it about that those powers are then lifted up into the loving heart. Rivers of spiritual love will flow from it

may well point to what is written under purification of the blood on the page Mystery of the Blood, whereby Wagner is quoted saying it is the will (lower forces) are purified by knowledge, the wisdom that John brings.