The incarnation of Christ into a human being requires special preparations for the human body. The human being Jesus that became the receptacle for the Christ being was not an ordinary human at all; in fact each of the bodily structural elements of Jesus at the Baptism was prepared in special ways (see schema FMC00.043 below).

The pathway of preparation upto the Baptism is grouped under the topic of the two Jesus children, because of the two different Jesus children that were born and became one or 'merged structurally' in the temple story at age 12. Each of the two children had a different preparatory path with a different geneology, as per gospels of Luke and Matthew. Many artworks (e.g. Italian painters in the middle ages) and sources (e.g. the scrolls of the dead sea) mention these two children, see references below for books who have grouped these sources.

The reason why this complex preparatory path was necessary (1909-09-20-GA114) is because Christ needed not just to join his spirit with the Earth, but become Man in each of Man's bodily principles downto the mineral physical body (see schema FMC00.080). This happened at age 30 for specific reasons; several aspects are to be considered together:

Schema FMC00.080 below gives an overview of the structure of Christ-Jesus:

The schema can be viewed on high resolution by clicking and zooming in, or downloading the JPG or PDF versions. 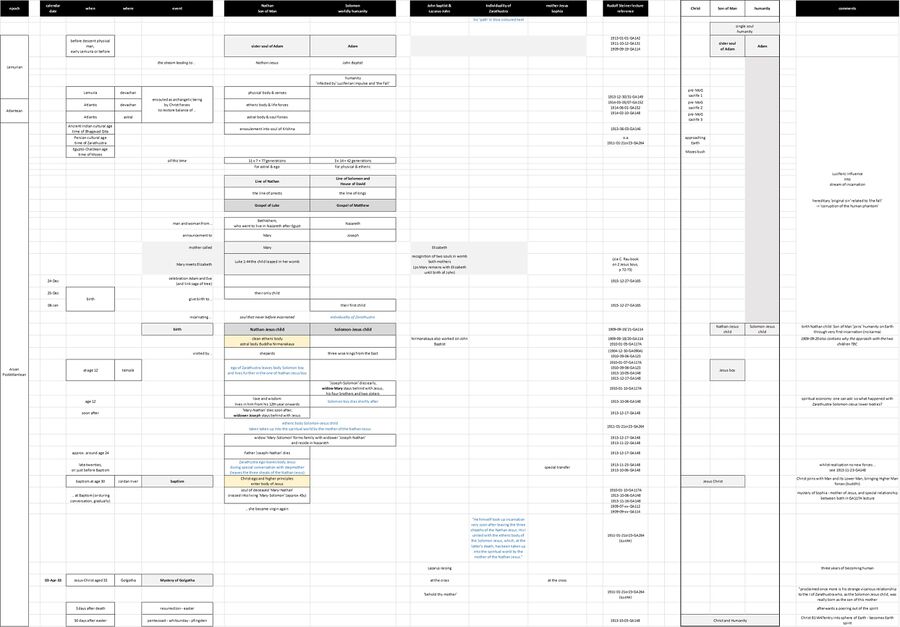 Schema FMC00.098 shows paintings by Da Vinci (left), Raphael's Madonna del Duca di Terranuova (middle), and a work by an unknown painter (photograph by the editor in a church in Italy).

Schema FMC00.098 shows various pictures of the scene in the temple at age 12 by Ambrogio Bergognone, Defedente Ferrari, and a greek icon.

FMC00.080 gives an overview of the structure of Christ-Jesus, for the three left columns refer to schema FMC00.043.

Schema FMC00.080A is an extended version of FMC00.080 whereby information of the higher triad is added. The Nathan Jesus child carried a 'pure' higher triad, a spiritual being and structure that also worked in the Krishna Impulse and The being of Elijah.

Schema FMC00.429 provides sketches with description of how to imagine Christ's 'descent' to Earth 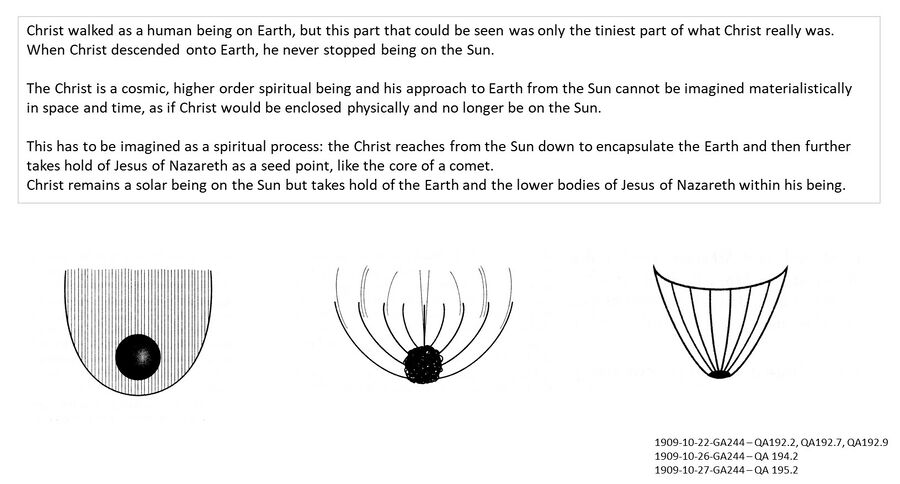 the merger of the Buddha and Zarathustra streams is discussed with a link not just to the gospels of Luke and Matthew, but also those of Mark and John.

See explanation on Mystery of John.

The special role of John and the mother of Jesus

Schema FMC00.043 shows how both John and the mother of Jesus appear as key players. There is the important relation between the souls of Nathan-Jesus and John as descendant from the stream of Adam, but the gospels contain many more touchpoints and clues, eg at the cross when Jesus gives John the mission to carry the story into the world. Similarly so for the 'mother of Jesus', see eg the book with selection of Steiner lectures 'Isis Mary Sophia' (2003).

Daskalos wrote the book 'Joshua Immanuel The Christ – His Life on Earth and His Teaching' (EN version 2001-13) in Greek and Aramaic in the last years of his life, and it contains a fragment where he speaks of the special figures being sent for the Mystery of Golgotha besides Joshua (Jesus), all of them he describes as

.. archangel of the order of the principalities [editor: archai] humanized by immaculate conception ..

What he means with the archangel orders listed is not obvious (though the 'order of the Maha-Els' means the order of Michael). The point however is that even besides Christ Jesus we are not having to do with 'ordinary human beings'.

Unqualified: about the Dead Sea scrolls