Alchemy describes the processes based on the four elements (see the Spectrum of elements and ethers as well as elementals of nature), whereby the lower is transformed into the higher (see Transmutation or Man's transformation and spiritualization). Its essence is about transformation of one substance into another by using spiritual influences and forces of nature (see etheric Formative forces), and this both with substance of the lower kingdoms, as with the highest kingdom of Man - the human being.

Hence, the term alchemy has an exoteric and esoteric meaning:

The two aspects above have the same underlying spiritual working principles, and alchemy uses an own symbolic language based on the states of aggregation whereby material processes are metaphors for spiritual transformations going from chaos to structure (see below).

See 'Further reading' section below, as well as Sources of spiritual science and More sources on the topic of initiation and magic

Schema FMC00.162: alchemical principles based on the four elements 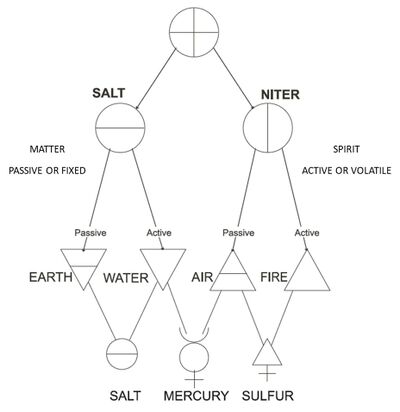 Schema FMC00.163 depicts the famous alchemical saying 'solve et coagula' with reference to the process of transformation or transmutaion and the underlying two polar opposite processes. In English it means:

Schema FMC00.154 captures a lecture where Rudolf Steiner describes the alchemical terms as inner processes, and a terminology representative of a different age (illustrated with the figures of J. Boehme, Bacon, G. Bruno).

.. wherever metallic soul, spirit and form are to be found, there too are metallic quicksilver, sulphur and salt .."

discusses the language of salt, mercury and sulphur used by oa Saint Martin

positions medieval terminology of the processes in Man of salt, mercury and sulphur and maps them to thinking, willing and feeling, see schema FMC00.154 above.

Note: Adam McLean inventorized alchemical books and came to some 1179 authors of books published before 1800, in a database of some 4678 books with 2810 unique works (info from the older Levity website, see list)