During Man's life development, the human being develops through an 'unfolding' of the different bodily principles in periods of seven years or 'septennia', related to the work of the hierarchies and corresponding the influences of the planetary spheres.

FMC00.236 provides an overview of the septennia or seven year periods and how Man develops his bodily principles corresponding to the planetary spheres due to the work of the spiritual hierarchies. 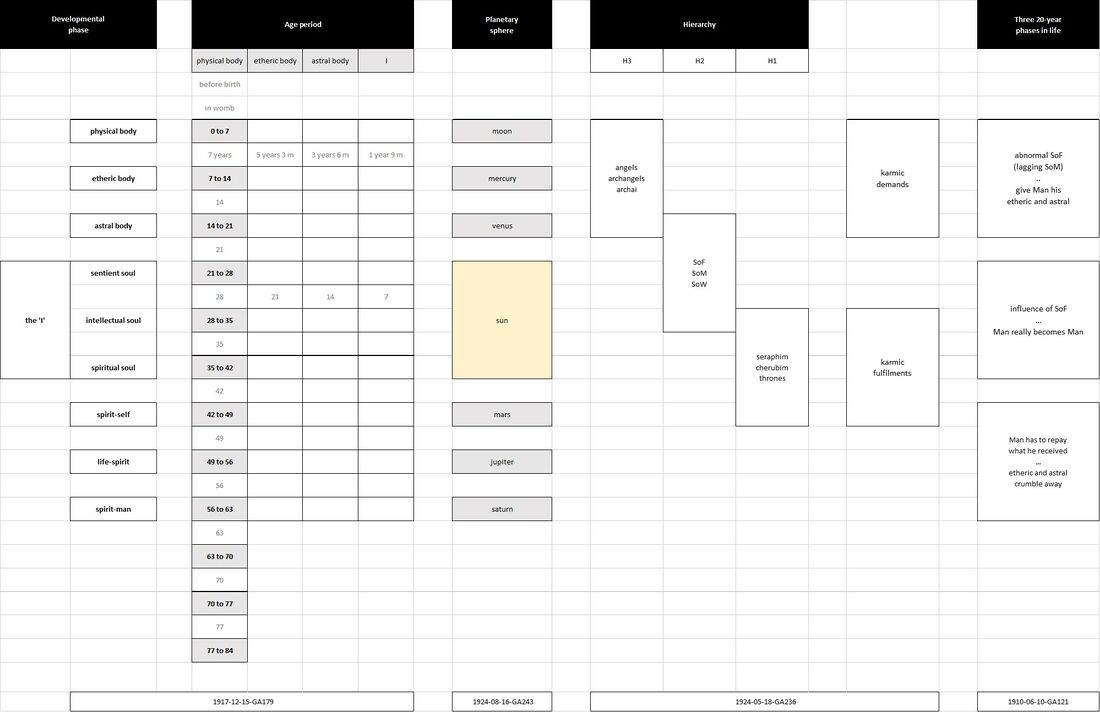 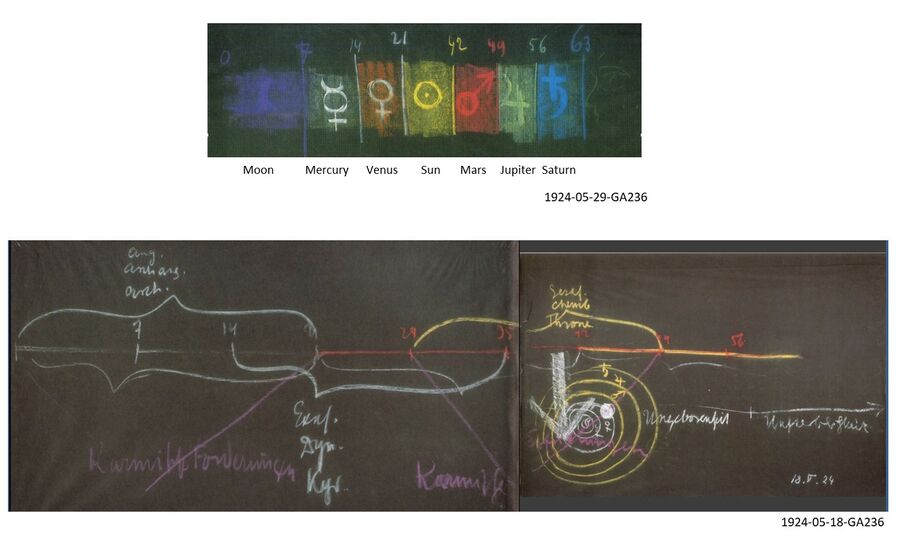 FMC00.237 depicts Life Chart diagram diagram by George O'Neill based on Steiner's lecture of 1924-08-16-GA311 (by Florin Lowndes, see publication under references for an excellent book). This diagram is often used and appears in many books for personal biography work. 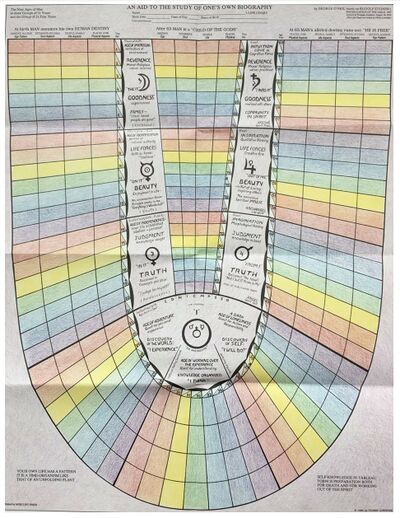 Pietro d'Abano (1257-1316) already writes about the seven year periods, see eg the following quotes from 'History of magic and experimental science' published in 1923 by Lynn Thorndike (1882-1965)

p895: In Difference 26 Peter divides the life of Man into seven ages under the seven planets

This applies, to the human being of today. Observation of human life guided by spiritual science clearly reveals these stages of development. The great leaders and leading figures of humanity have also known why the thirty-fifth year is so important. Dante was aware why he made particular mention of his thirty-fifth year as the time when he had the visions set down in his great poem. At the very beginning of the Divine Comedy there is an indication to this effect. At the age of thirty-five man's being has progressed to the point where the can make full use of the faculties dependent upon the astral body, the sentient soul and the intellectual soul.

1919-10-04-GA191 discusses intuition, inspiration and imagination the first three seven year periods. Earth forces work in the first, air forces in the second, and in the third period work the from outside instreaming forces. After the 21st year these forces work in the blood.

You will see that the latter is the case. As my book Education of the Child in the Light of Anthroposophy tells you, we can see human life running its course in three stages: from birth to the change of teeth, from the change of teeth to puberty, and from puberty till about the twenty-first year. If you do not regard man purely superficially, you will be struck by the fact that the nature of man's development is entirely different in the three different seven-year stages. The pushing through of our permanent teeth is connected with the development of forces that are not merely confined, let us say, to our jaws or their neighboring organs, but fill our whole physical body. There is work in progress within our physical body between birth and the seventh year, and this work comes to an end with the pushing through of our permanent teeth.

From this you will see that the forces of Imagination, Inspiration and Intuition are not just any old forces gotten from we do not know where, but are the same forces as those we grow with from our birth to the age of twenty-one. So the forces that live in Imagination, Inspiration and Intuition are very healthy forces. They are the forces a human being uses for his healthy growth and that go to sleep within his body when the corresponding phases of growth are completed.

The question now arises as to how this activity is distributed. There is a considerable difference in this respect in the first, second and third stage of life, that is, up till the seventh year, the fourteenth year and the twenty-first year.

So we have the earth's interior in the first period of life; encircling air in the second period of life, that is, what the earth itself is embedded in. The forces streaming down from cosmic spaces in so far as these cosmic spaces are filled with our own actual planetary system, up till the twenty- first year. Not until the age of twenty-one does man tear himself away, as it were, from the influences brought about in him from outside by the planets and the planetary system belonging to these.

Please notice that in everything I have referred to as having an influence on man, bodily influences are of course included. They are bodily processes that the forces from the planet's interior bring about up till the seventh year. They are bodily processes that are formed by the circulating air in connection with the breathing and so on between the seventh and the fourteenth year. There is no doubt that they are bodily processes, in fact actual transformations of bodily organs are brought about; everything being connected with man's growing and becoming larger. Thus man grows beyond all this work being done on him by the earth; all this ceases at twenty-one.

Up till twenty-one we draw on what comes from the earth and its planetary system in the way we have described. We build up our constitution with the earth's help.

Activities going on in the blood forces always used to ensure that this happened in the past. As you will probably know, man has not learned to release the planetary forces himself, after the age of twenty-one. And yet he has been doing so. He did it as an unconscious process. The capacity was in his blood. It was built into him to do it. The important change in our present time — and the present extends over a long period of several centuries, of course — is that man's blood is losing the capacity to release what we have put into the organism in this way, before twenty- one.

The seven year rhythm can be found in one's personal biography in: