[2.6] - historical research into people and events

Schema FMC00.116 shows the symbol for Good Friday and Easter: the spiritual sun in the physical sun. 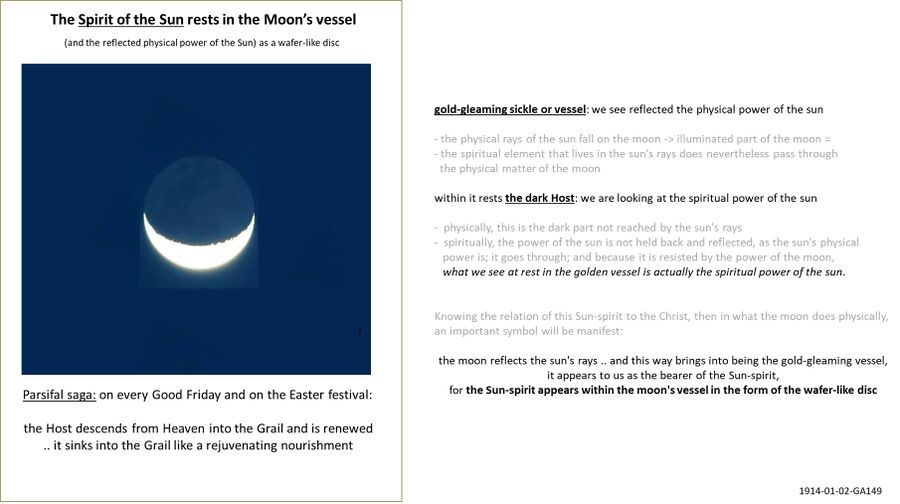 On the right: Man's sentient consciousness in the world, illustrated by the sensory perception and cosmic influences from nature working from outside: instreaming from without. On the right, Man developing the twelve-foldness from out of his own inner centre. 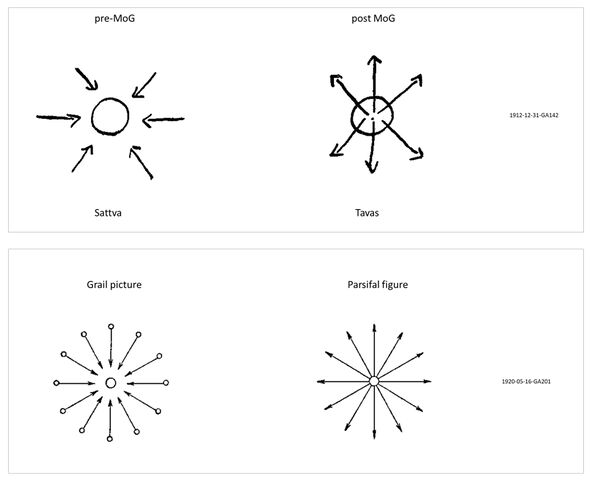 Schema FMC00.394 are the illustrations for the elaboration of a feelings based process that a Parsifal candidate initiate was brought to feel with his whole soul experience (see lecture references, p 427-454 in the 2007 EN edition). See the link with the pentagram symbol

1914-01-02-GA149 explains how the Christ Impulse works in the subconscious 'under the surface' of contemporary human daily consciousness .. we are not consciously aware that we have a seed or spark of Christ consciousness in our 'I' .. and the etheric aspects of our heart and blood

.. the soul of Parsifal is related to the new, subconscious, historical impulse permeated by the Christ aura, the Christ Impulse, although he knows nothing of it ..

Stages are described as:

See also Paradise legend and Streams of Abel and Cain.

Keyserlingk reports on her esoteric conversations with Rudolf Steiner:

In the Uhland edition of Parsifal with a foreword by Rudolf Steiner, an episode occurs that is not found anywhere else: the journey of the young Grail Queen Repanse, who is awaited in India as the wife of `Fire-Fils' (Feirefis). She had embarked in Marseilles to take the emerald-green vessel, containing the Blood of Christ, the Graul, to the land of Priest-King John. When the Graul was carried ashore, the Graul Castle upon the heights lit up in flames to receive it.

I thought about this for a long while, and the `Fire-Sons' of India who are to appear as magnificent figures at some future time, merged in my mind with the word Fire-Fils, which has the same meaning as Fire-Son. Feirefis is the dark brother of Parsifal, who is to succeed the latter as Grail King.

Following on this thought I then enquired: `Is Feirefis a Fire-Son?'

I: 'And Parsifal the Light-Son?'

Rudolf Steiner: 'Yes,' and then he said a few words which I wanted to write down, but could not quite manage, and so he dictated them to me: `'Parsifal is the Light-Son. He is the only incarnation of an important individuality on earth.

are the sons of God, divine brothers of man, whom he has lost

They meet us in three streams:

Note regarding 'the only incarnation of important individuality': GA264 maps various incarnations of high individualities to storylines in the gospels and the Bible, and there Mani or Manes is stated to be the individuality that incarnated as Parsifal. However Mani also incarnated in Babylon in the 3th century.

More than anyone else, Richard Wagner made it possible for people to take this in without knowing it. Richard Wagner was a missionary whose mission it was to give something full of significance to the world, without humanity being aware of this truth. .. .. The strange music written by Wagner would create quite specific vibrations in the ether bodies of those who listened to it. The ether body is connected with all the profound motions of the blood. Richard Wagner understood the secret of the purified blood. His melodies hold the vibrations that have to be in the human ether body when it becomes purified in the way that is necessary so that the secret of the grail may be received.

See also more under the 'References and further reading section' of related topics such as Holy Grail.