A Near-Death Experience (NDE) is a profound personal experience associated with death or impending death, experienced as a significant (spiritual) event by the experiencer.

NDEs are characterized by the following pattern: a person comes close to death (eg in case of accidents of critical illness in hospital), and then actually experiences leaving the physical body and going through a process, after which the person returns to the physical body and continues incarnate life on Earth. Certain elements of the process that is experienced come back often in reports by experiencers, such as: seeing one's life memory tableau, going through a tunnel, seeing a light, etc.

An NDE usually or mostly has a major impact on the individual's personality and outlook on life, in terms of values and beliefs. Kenneth Ring (see sources below) found 'greater appreciation for life, higher self-esteem, greater compassion for others, less concern for acquiring material wealth, a heightened sense of purpose and self-understanding, desire to learn, elevated spirituality, greater ecological sensitivity and planetary concern, and a feeling of being more intuitive'.

Schema FMC00.024 is an illustration by Hieronymus Bosch made around 1505-1515, reminiscent of the tunnel of life as appearing in the reports of people having had Near Death Experiences (NDE). 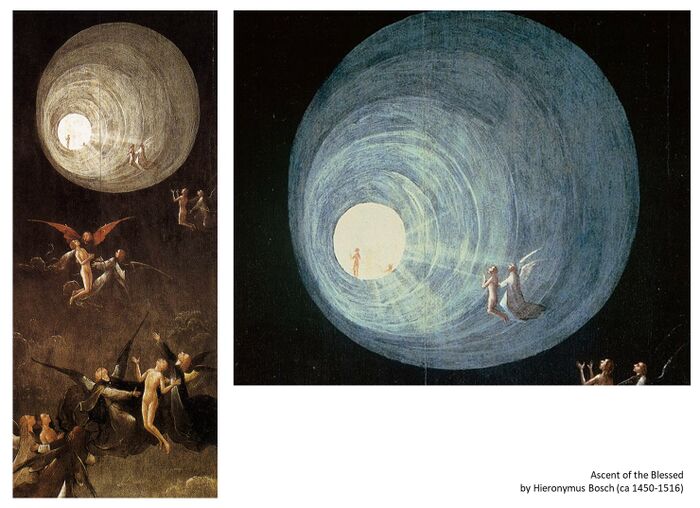 The story of Arisdeu in 79 AD.

Arisdeu was a dishonest individual with a bad reputation in his community. He suffered an accident where he fell and hit his head against a rock, resulting in a coma which lasted a couple of days. During this coma, Arisdeu perceived himself outside his body. He found himself with his helper, or spiritual guide, and talked to her. During this experience, Arisdeu also saw another dimension which was inhabited by consciousnesses with little equilibrium and stayed to examine them.

Then, at a certain moment, he felt a force pulling him back inside his body. Arisdeu woke up in the physical plane at the moment in which he was about to be buried. One can imagine the reaction of the community. Nevertheless, since this experience, Arisdeu changed his ethics, values, and behavior, transforming himself into a respected citizen valued in his community.

in Lessons from the Light, brings forth from his thorough research, some exceptional stories from NDE experiences: in Chapter 13: Journeys to the source.

For a perspective on aspect from a 'Christ in the etheric' experience, see:

Christ in the etheric#Note .5B3.5D - Christ experiences during NDEs .28Near Death Experiences.29

Given the NDE is a reality and a fact, with many thousands of witness reports and scientific studies by doctors and clinics, what about the appearance of a human figure in light that is perceived as Christ Jesus? These reports exist, but in today's world dominated by the media and huge amounts of unqualified information, it is hard to judge or separate fact from fiction. The fundamentalistic Christian stream of belief in the US does not help to shed a light of objective factuality on this (...).

This topic is not about judging, but of collecting elements for an assessment in how far the NDE circumstances could facilitate the experience of what Rudolf Steiner described as a Damascus experience of seing Christ in the Etheric.

For very extensive further literature lists and reviews, we refer to the specialized studies such as the books of Kenneth Ring and others.

A whole number of 'bestsellers' followed, a.o. just the few examples below as an entry to myriads of others: