The prajapatis are a high class of spiritual beings, and creators of a specific solar system, directly related to the Seven creative spirits and Logoi.

The 10 prajapati of CoC are at the Nirvana plane, the last being the Third Logos itself. 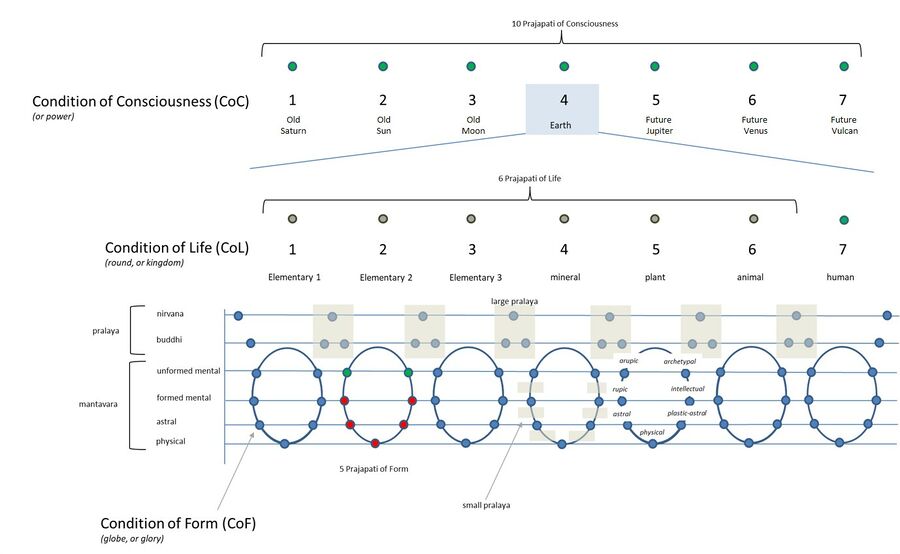 When we have arrived on the nirvana plane, the entity will have reached the point where its atman is completely on the outside. We are then dealing with the kind of Logos which we have called 'the seven'. These are the Seven creative spirits, which is also why we have seven different root races with seven sub races or cultural ages in each.

On the nirvana plane the cosmic system is brought to completion by the 7 times 3 = 21 prajapatis. The last of these is abc, the third Logos itself.

In reality these seven CoF states are not seven different CoL but just one cycle or orb; this goes through seven successive states. Each state needs to be transformed into the next. To do this calls for a spirit which represents a specific sum of energy and takes the orb from one level to the next. Such a spirit is called prajapati. These sublime spirits, with their tremendous powers, were given that ability in earlier evolutions. They have a long learning stage behind them. This has made them into energies able to transform one orb into the next in the new universe.

H.P. Blavatsky also describes the Prajapati spirits in 'The Secret Doctrine Vol 1', and calls them 'the Builders'. She divides them into three chief groups, each group again divided in seven sub-groups.

The “Builders” are the representatives of the first “Mind-Born” Entities (DL editor: the Logoi),

The Lipika (a description of whom is given in the Commentary on Stanza IV. No. 6) are the Spirits of the Universe, whereas the Builders are only our own planetary deities. The former belong to the most occult portion of Cosmogenesis, which cannot be given here. Whether the Adepts (even the highest) know this angelic order in the completeness of its triple degrees, or only the lower one connected with the records of our world, is something which the writer is unprepared to say, and she would incline rather to the latter supposition. Of its highest grade one thing only is taught: the Lipika are connected with Karma — being its direct Recorders.

In 1904-07-03-GA089 it is said that there is a guiding spirit per planetary stage. It would not be impossible that the prajapati of CoC is meant hereby (see green dots in schema). However to try and map the Prajapatis to the Twelve guiding spirits as per zodiac can only be guessing.

The Blavatsky quote can be compared with the functional scope of the Seraphim and Cherubim that also makes the distinction between planetary solar system or beyond.