Christ in the future cultural ages and next epochs

From Anthroposophy
(Redirected from Christ in the future cultural ages and next epoch)
Jump to:navigation, search

Note: for the current century, see also : Christ Module 19 - experiencing the Christ and Christ in the etheric

Future Conditions of Life (or rounds)

Schema FMC00.082 shows (linking into schema FMC00.047), the evolving relationship Man will have (or be able to develop) with the Christ

Schema FMC00.081 gives an overview of some of the expected faculties related to the appearance of 'Christ in the etheric' due to the arising new clairvoyance. As depicted in the GA191 BBD (see eg FMC00.013) this clairvoyance will be a mixture of wisdom with moral consciousness, hence the elements related to karma in the table below. 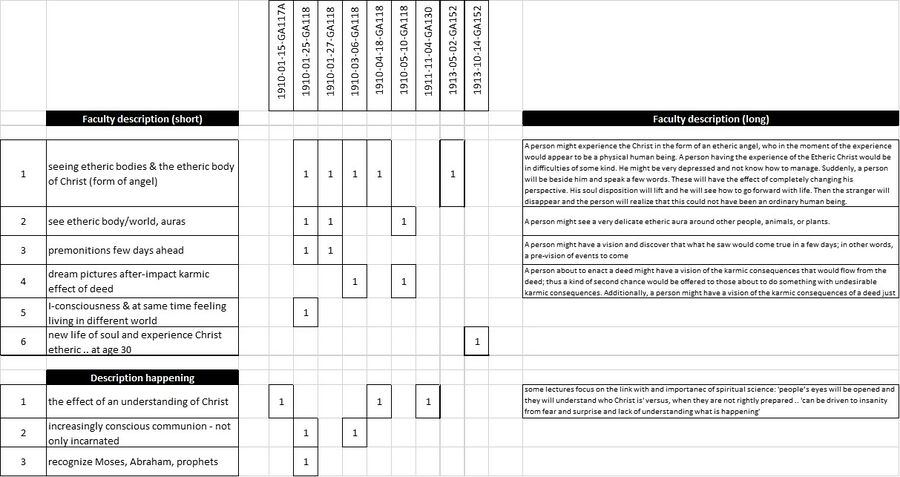 Schema FMC00.239 shows the archangelic rulers of approx 354 periods for the current cultural age (plus and minus a cultural age). See also Spiritual hierarchies and their eigenperiods for more info on the 354 period. Rudolf Steiner uses this period to describe the nature of current Michael age and the future Oriphiel age.

Schema FMC00.373 sketches the symbols of the Christ in the language of the stars and the zodiac signs: the five pointed star, and the symbol Pi.

See Note [1] - 'The Christ Impulse in the starry script' in the Discussion area below. See also Schema FMC00.020 on Holy Supper symbolism - apostles 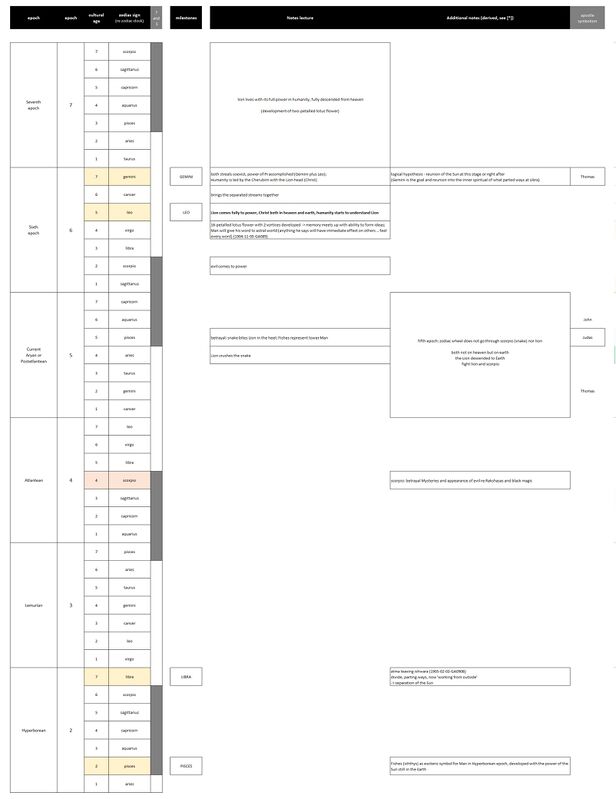 Schema FMC00.373B depicts the symbolism of of the Christ impulse in the language of the zodiac signs. This version was derived from Schema FMC00.373A to represent it along the time axis in a similar format as other schemas that depict the journey between the third and sixth epochs.

Schema FMC00.376 provides an synthetic overview of the Christ Impulse with its four main interventions in the development of humanity ('I' in red), how the Christ was observed by initiates in the current epoch ('O' in grey), how the Christ will manifest in the higher worlds in the next cultural ages ('M' in blue), and the workings of the Christ Impulse per period of 800 years '(W' in green). Lecture references are given as indication but not exhaustively, for these refer to the corresponding topic pages. More detail in FMC00.376A below.

It includes comments (below) from a lecture from 1915 studied by Maximilian Rebholz in the 1940s, long before the GA, but for which the exact lecture date was apparently missing. As Schema FMC00.120 on Rudolf Steiner's Gesamtausgabe (GA) shows, one has to remain conscious of the fact that more than a quarter of Rudolf Steiner's lectures don't have official notes. However in the first decades notes were exchanged between students, and hence it is always possible that lecture notes appear or are found back, or did not make it to the official registry in Dornach. This was certainly the case in the 1940s, knowing that Rebholz was a diligent collector of materials for decades. 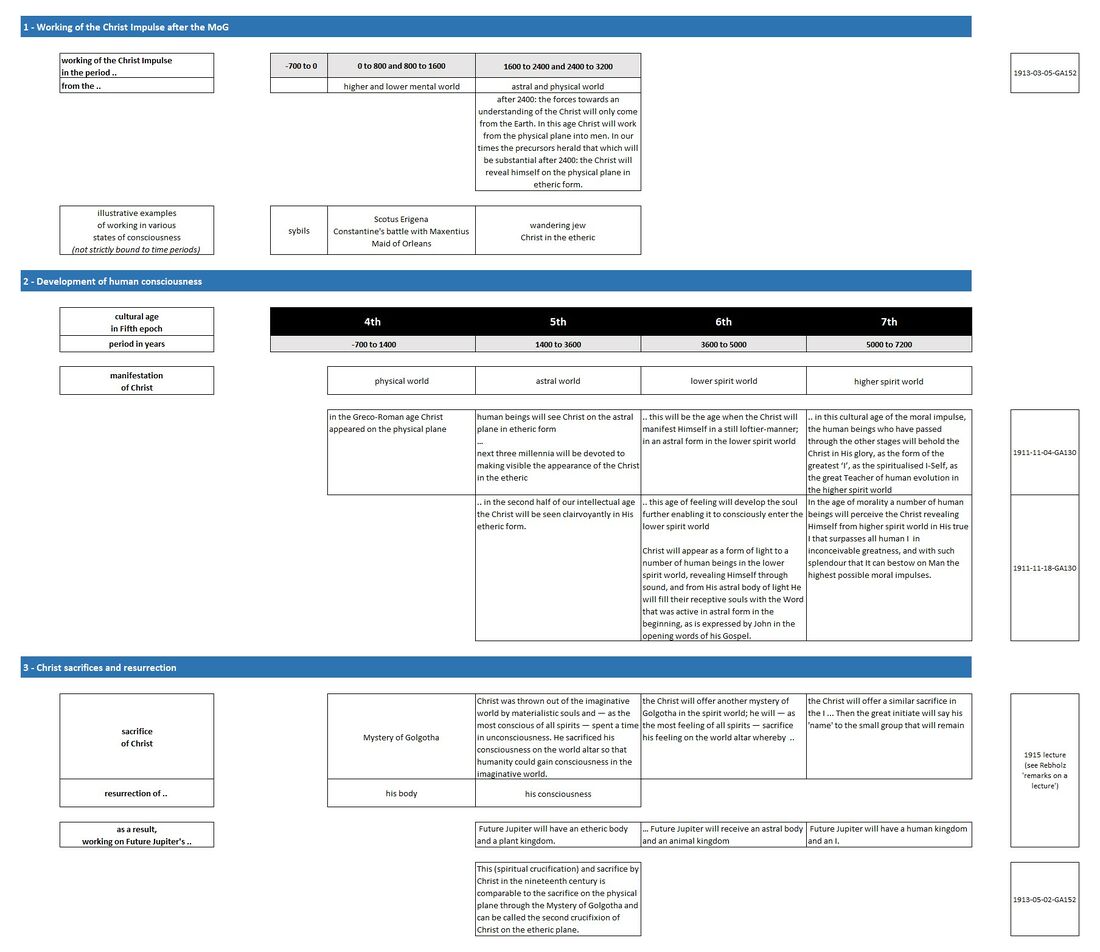 Schema FMC00.371 shows how our state of soul brings us closer to the Christ Impulse.

More on: Christ Module 19 - experiencing the Christ and Schema FMC00.189 on Second Adam

It will permeate the totality of human souls, who will rise out of the corpse of the Earth, out of the earthly dross.

The Christ Being, together with the totality of human souls, ascends further into the spiritual realms, in order later to come to the next incorporation of the Earth, which in Spiritual Science we call Future Jupiter

When we look back we remember what came to pass at the Baptism by John in the Jordan, when Christ revealed Himself in a human form, visible on the earth among mankind. Further, we will fill our souls with the thought of how, as regards His outer form, Christ then united Himself with the Hierarchy of the Angels and has since that time lived invisibly in the sphere of the earth. Let us remember what has been said: that in the invisible worlds there is no death. Christ Himself, because He descended to our world, passed through a death similar to that of human beings. When he again became a spiritual being, he still retained the remembrance of his death; but as a being of the rank of the angels in which he continued to manifest himself outwardly, he could experience only a diminution of consciousness.

(not on rsarchive, extract freely translated).

Note: the first two millenia are covered on The Christ Impulse from the 1st to the 20th century

In the period of 800 BC until our times, humanity consumes the last herited divine forces. Then a null-point takes place with the MoG, and it works into humanity. The stimulating powers of the Christ Impulse worked differently in the period after MoG, coming from different planes or worlds of consciousness.

In this way, we see how the working of the Christ Impulse, rolling off in periods from 800 to 800 years, is related to the impulses from the spiritual world.

[1] - The Christ Impulse in the starry script

Both lectures were published as recent volumes in the GA and have not been translated, however see Zodiac streams: seven and five for an extract of the 1905 lecture.

For a view on the Christ as the Lion, see Christ Module 9: Trinity and Logoi#.5B2.5D - Christ as Lion and Sun Cherub. In point [9C] above on that pages are given references to various descriptions, (a) to (f).

1 - Christ in the sixth epoch

An enabling forebode is the further development of the spiritual physiology of Man in the fourth cultural age.

Not Man today, but rather see Schema FMC00.176 on Man past and future; shortened recap copy from that page (our wordings):

In the sixth epoch, Man's form will change: the current two legs and right arm will disappear, the current organs will develop and three main organs will remain: the heart as Buddhi-organ, the two-petalled lotus-flower between the eyes will develop two wings and be the motive organ of will, an organ of movement, arising from metamorphosis of the left side of the chest, and the left hand. Man will ‘fly’ and make use of two last of these organs.The pineal gland and pituitary glands and sympathetic nervous system will give rise to a second spinal column. Ida & Pingala will merge with Sushumna and become one. In the seventh epoch the two spinal columns will merge into one.

On that picture now superimpose Schema FMC00.092 on Development of the chakras. Now look at Schema FMC00.373A which provides a similar view. It is clear that, whereas Man will be partly spiritualized in the sixth epoch, the astral physiology develops and the chakras will provide a direct connection with the spiritual realities, just as our senses today do for the mineral realm.

2 - Reunion with the Sun, and third 'father' impulse

Note that the sixth epoch will also provide recapitulation of the previous epochs, and the sixth cultural age is then really when the new is created, see Schema FMC00.168 on Recapitulation.

From contemplating the above two lectures, together with and against a basis of spiritual scientific knowledge, can be put forth the following. It is advised to study the two lectures in depth and also laterally with the links provided.

Schema FMC00.373 (middle) depicts the evolution of Man from the lower to the higher, from Fishes to Gemini. FMC00.373 (right) shows how that is done, from a separation in Libra, splitting two tracks in development that is then brough together over time to the convergence point Gemini.

The fact that Steiner mentions that in the Seventh epoch, Christ will be fully descended from heaven, and lives with its full power in humanity, points to the period after the reunion with the Sun. It is not so far fetched to see Gemini as the period of that merger.

This is further supported by various other small points, eg Schema FMC00.185 shows the third atma impulse for spiritualization in the sixth epoch. This could be seen fitting into the above, as the new development in the sixth age of the sixth epoch.

The lecture 1906-10-04-GA091 contains an interesting statement in two places, and given these are notes from Mathilde Scholl in a private teaching session, it is rather unlikely that it is an error. In fact, this statement appears in other places too.

Here are the two quotes:

.. In the sixth cultural age, the risen Christ will be declared, in the fifth age of the Sixth epoch he stands again in the heavens and on Earth, at that time Man stars the understands the sign of the Lion as the sign of the being who, in the second and fifth epochs came down from heaven to have his whole power (penetrate and) embed into Man.

.. Then the number Pi also reaches its fulfillment, as Pi is the sign for the force of the Lion in Man, which in the seventh cultural age of the Sixth epoch draws into Man. Pi = Gemini + Lion. Then humanity will be very consciously under the lead of the Cherubim with the Lion head, who brought its power into Man in the second epoch, and who overcame the enemy of humanity in the fifth epoch by killing the dragon.

.. the sun separated from the Earth: the present Earth plus the present moon. On the sun remained the beings who are the spiritual directors of earthly events. When they came over from Old Moon there were seven such beings; in Genesis these seven Spirits of Light are called Elohim. For a time they went through their evolution together with the Earth, then they drew forth the sun so that they could now work upon the Earth from the sun. Six of them united their existence with the actual cosmic sun, and one, known in the Old Testament as Jehovah, separated from them and remained at first united with the earth. He guided and directed the earthly evolution from within, while the others worked upon it from without.

The influence of the SoF working from outside of Man, was the major influence in the second epoch, and it was required for the development of Man.

Another idea one could contemplate or entertain is the fact that Christ 'came down' from the higher realms in the second epoch, because this is literally what it says in1906-10-04-GA091: 'came down from heaven'.

To 'see' this: double click Schema FMC00.077B where column 'Earth' shows how the second Logos comes into our solar system evolution 'through the SoW gate' (see Christ's descent to Earth#1912-04-13-GA136)