Astral body of the plants around the earth 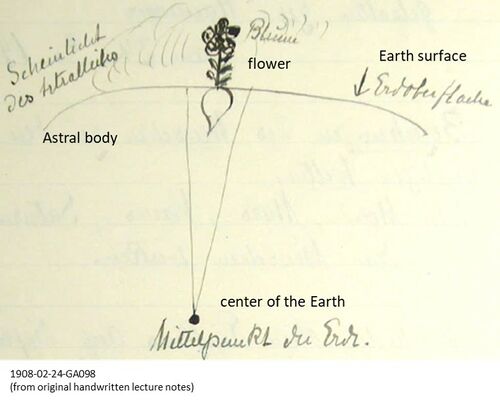 If I am to sketch it diagrammatically, it will be somewhat like this (a drawing is made on the blackboard):

Here is the earth, with some accumulation of slate-formation on it, and then the plants growing out of the earth towards the outer universe. Spatially, the plants need by no means coincide with the slate-formation, just as, for instance, a thought, which is based on the instrument of the brain, need not coincide with a movement of the big toe. We are not concerned here with spatial coincidence, but with apprehending the nature of the slate-formation when we try to do so not only through chemical and physical examination, but also through penetrating to the essence of this slaty formation by means of spiritual investigation. Then we shall come to the conclusion: If the forces inherent in slaty matter were to act upon the earth only by themselves, they would have to be connected with a condition of life which develops in precisely the same way as the plant-world.

The plant-world develops in such a way that it represents only physical corporeality, etheric corporeality; that is, in the actual plants themselves. But when we come to the astral element of the plant-world, we must imagine this astral element of the plant-world as an astral atmosphere which encompasses the earth. The plants themselves have no astral bodies, but the earth is enveloped in an astral atmosphere, and this astrality plays an important part, in the process of the unfolding of blossom and fruit. The terrestrial plant-world as a whole, therefore, has one uniform, common astral body which nowhere interpenetrates the plant itself, except at most in a very slight degree when fructification begins in the blossom. Generally speaking, it floats cloud-like over the vegetation and stimulates blossom and fruit formation.

The plant-world develops in such a way that it represents only physical corporeality, etheric corporeality; that is, in the actual plants themselves. But when we come to the astral element of the plant-world, we must imagine this astral element of the plant-world as an astral atmosphere which encompasses the earth. The plants themselves have no astral bodies, but the earth is enveloped in an astral atmosphere, and this astrality plays an important part, for instance, in the process of the unfolding of blossom and fruit. The terrestrial plant-world as a whole, therefore, has one uniform, common astral body which nowhere interpenetrates the plant itself, except at most in a very slight degree when fructification begins in the blossom. Generally speaking, it floats cloud-like over the vegetation and stimulates blossom and fruit formation.

The plant-life of the earth would tend to spread with over-exuberance into outer cosmic space were it not kept in check by the radiations from the mineral-forces of the slate-formation. One day, people will have to study from this point of view a living geography and geology of the earth; it will be realised that a study of what constitutes the skeleton of the earth, as it were, must be pursued not only from the geological angle, but in relation to the being of the earth as a whole; in relation, also, to its organic life and its nature of soul-and-spirit.

Now the entire plant-world is intimately bound up with the sun-forces, with solar action. The effects produced by the sun are not confined to the emanations of warmth and light radiating from the etheric-physical rays of the sun, for the warmth and light are permeated through and through by spirit-and-soul. These forces of spirit-and-soul are allied with those pertaining to the slate-formation. That in a certain way everything of a slate-nature is spread all over the earth is connected with the fact that plant-life on the earth exists in manifold forms. The spatial aspect is — as I said — of no immediate importance; it must not be imagined, for example, that the slate-formation has to be here or there in order that plants may grow out of it. The radiations of the slate-formation stream out; they are carried all over the earth by all kinds of currents, especially magnetic currents, and on these earth-encircling radiations of the slate-formation, the plants live. Where, on the contrary, the slate-formation is in itself developed to the highest degree, plant-life cannot thrive today because there the life-forces of the plants are drawn too forcibly into the earthly element and therefore cannot unfold. There, the forces which fetter the plant to the earthly element are so overpowering that the unfolding of plant-life — in which the cosmic forces must also play their part — is prevented.

To account for the nature of the slaty element in the earth is possible, therefore, only if one can go back, in the sense in which it is described in my Occult Science, to the time when the earth itself had a Sun-existence. It was then that the slaty element within the earth was being prepared. At that time, when the earth had a Sun-existence, the physical part of the earth had advanced only to a state of sprouting plant-life. The Sun-existence was such that no definite plants or animal beings could develop there. Plants as they are today were non-existent, but the earth itself had a kind of plant-existence, and out of this plant-existence there emerged on one hand the plant-world, while on the other hand a hardening took place of what in the plant-world are also formative forces, a hardening into slate-formation.

When you look at a plant you can see that with its root it turns earthwards; it grows into the earth — is, as it were, drawn towards the centre of the earth — and then unfolds outwards. The plant's structure gives a clear indication of its complete adaptation to earth-existence. Naturally, a more complicated plant form calls for a more complicated description, but on the whole it remains essentially the same. The plant is not independent. Where it enters the soil it contracts, unites itself with the earth; where it rises up it spreads out and turns towards the light that radiates in all directions. This structure of the plant is best understood if studied in connection with its intimate relation to the plant's position in respect of the earth.

.. considering the plant root we are in the dimensions of space and gravity

When however one wants to explain the form of the blossom, for this we need the peripheral coordinates for forces that work from the periphery in a centripetal way .. this works from the outside with gliding pressurizing movements.

.. for these etheric formative forces, also the coordinate system is qualitatively complementary ..

.. often the error is that for all that etheric, one needs not to use and think in terms of a central coordinate system [and forces], but the sphere that works from the outside to the center ..

We can, therefore, place before ourselves two verses, which give expression to a great secret of nature:

Behold the plant: It is the butterfly, Fettered by the earth.

Behold the butterfly: It is the plant, Freed by the cosmos.

The plant — the butterfly fettered by the earth! The butterfly — the plant freed from the earth by the cosmos!

If one looks at the butterfly, indeed at any insect, from the stage of the egg to when it is fluttering away, it is the plant raised up into the air, fashioned in the air by the cosmos. If one looks at the plant, it is the butterfly fettered to what is below. The egg is claimed by the earth. The caterpillar is metamorphosed into leaf-formation. In what is contracted in the plant we have the metamorphosis of the chrysalis-formation. And then what unfolds into the butterfly itself, in the plant develops into the blossom. Small wonder that such an intimate relationship exists between the world of the butterflies, the insect-world in general, and the world of the plants. For in truth those spiritual beings which are behind the insects, the butterflies, must say to themselves: There below are our relatives; we must have intercourse with them, unite ourselves with them — unite ourselves with them in the enjoyment of their juices, and so on, for they are our brothers. They are our brothers who have wandered down into the domain of the earth, who have become fettered to the earthly, who have won another existence.

And again, the spirits who ensoul the plants can look up to the butterflies and say: These are the heavenly relatives of the earthly plants.

.. no-one can understand the butterfly, which has sunk down into the earth, unless he metamorphoses abstract thoughts into artistic sense. No-one can understand the nature of the blossoming plant, which, as the butterfly, has been uplifted into the air by the light and by cosmic forces, unless once again he can bring artistic movement into abstract thoughts. ..

It is a unique experience to see an insect poised on a plant, and at the same time to see how the astrality holds sway above the blossom. Here the plant is striving outwards from the earthly. The plant's longing for the heavenly works and weaves above the iridescent petals of the blossom. The plant cannot of itself satisfy this longing. Thus there radiates towards it from the cosmos what is of the nature of the butterfly. In beholding this the plant realizes the satisfaction of its own desires. And this is the wonderful relationship existing in the environment of the earth, namely that the longings of the plant-world are assuaged in looking up to the insects, in particular the world of the butterflies. What the blossoming flower longs for, as it radiates its colour out into world-space becomes for it fulfillment in knowledge when the butterfly approaches it with its shimmer of colours. Out-streaming warmth, out-streaming longing: in-streaming satisfaction from the heavens — this is the interplay between the world of the blossoming plants and the world of the butterflies.