The life of Rudolf Steiner

Rudolf Steiner (1861-1925) was an influential incarnation of an important spiritual Individuality closely related to the White Lodge and Christian Rosenkreutz in the important Michael age starting in 1879, see also Sources of spiritual science.

His life touched and influenced many souls part of The Michaelic stream directly across Europe. His lifework provided the foundation for a worldwide movement of spiritual science or anthroposophy, that inspires many hundred thousands op people across the world.

As a consequence, the life of the man has been the subject of great interest, one can probably find more than hundred books about his life. Tables FMC00.365 and FMC00.366 below provide a starter overview of dozens of books about his life, including reports from people who knew Steiner directly and describe him as a person from many angles of perspective. 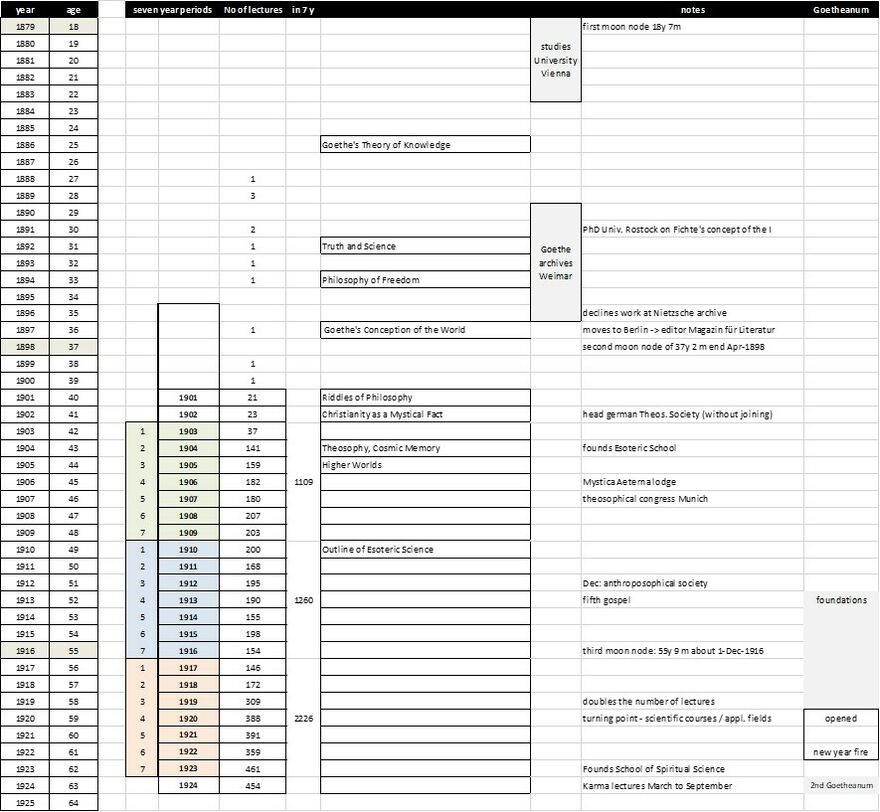 Table FMC00.365 provides a non-exhaustive overview of biographical literature on the life and person of Rudolf Steiner. ISO 3166 codes for country/language where it is not English.

No 31 in the table is Steiner's own partial autobiography. Besides the early books by his students such as Zeylmans (1932) and Wachsmuth (1951) or Bock (1961), well known post-war works were the works by Sheperd (1955), Hemleben (1963, in EN 1975), Colin Wilson (1985) and Lindenberg (1988-1997). The last three have been translated and are available in multiple languages. As the table shows not exhaustively, not all works of biographers were translated or can be compared on equal footing, eg Rihouët-Coroze. Two extended works mentioning are the four volume 'Das Wirken Rudolf Steiners' (1970-80s in DE only) and the recent seven volume bio by Peter Selg (2014-2019). 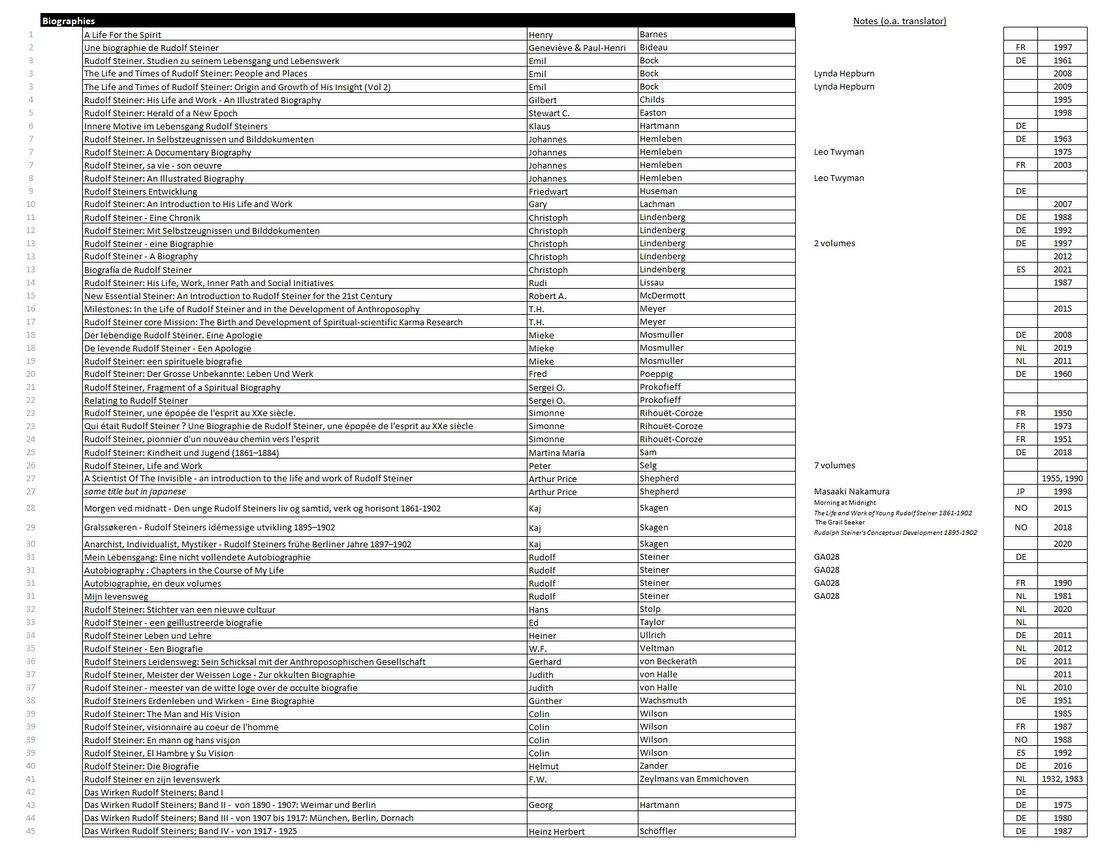 Table FMC00.366 provides a non-exhaustive overview of literature on the life and person of Rudolf Steiner, from personal reminiscences and memories by people who knew him directly. See Discussion area for more qualifications and opinions. 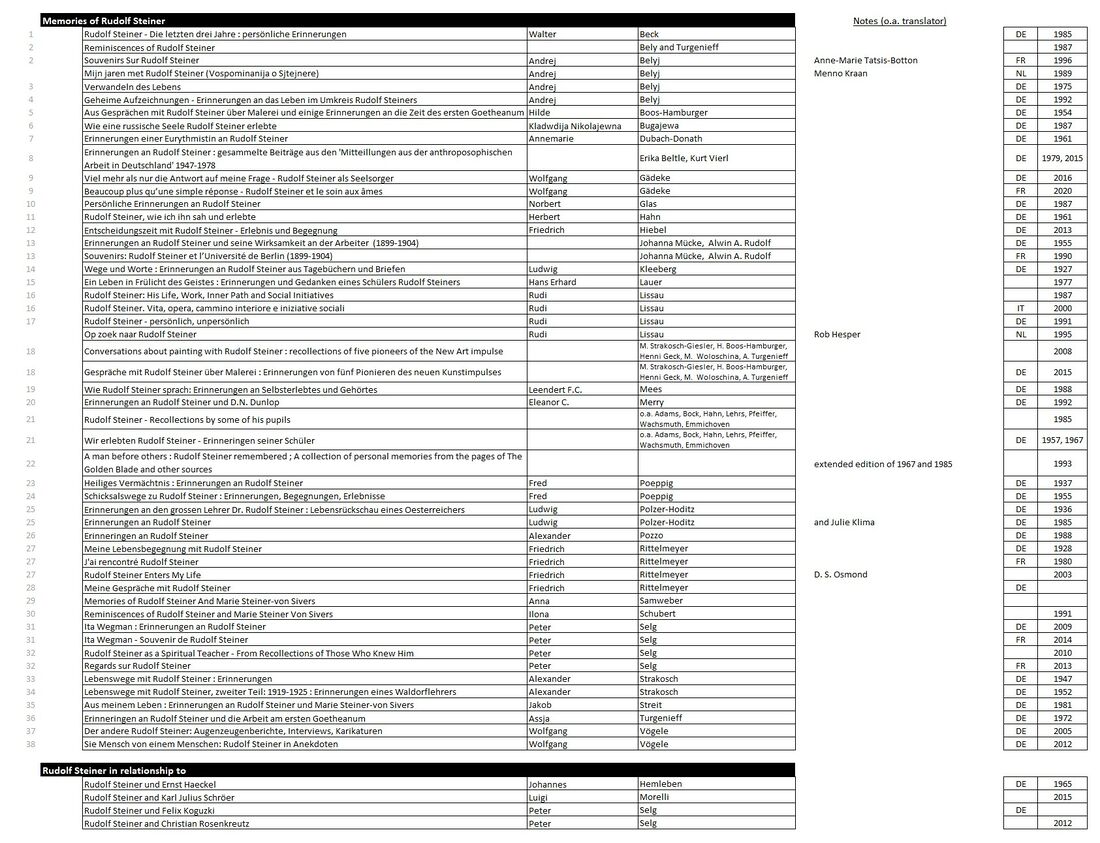 Most of these are in German. It is suggested to look into second hand bookshops online to find certain works no longer readily available.

In English, good introductory reads as an introduction to the personal side of Rudolf Steiner are No 21 or 22 in the table

As mentioned, tables FMC00.365 and FMC00.366 are surely not complete. Please let us know if you know of any others, so these can be updated.