Christ-Jesus performed many miracles during his three years on Earth, many more than those mentioned in the gospels.

From these, Rudolf Steiner extracts seven miracles as signs of an increase in power of the Christ working through the bodily structure of Jesus.

Schema FMC00.025 provides an overview of the gradual increase in the Christ power as developing (purifying) and using the lower bodily structures of Jesus. Note that in the 1909-07-GA112 lectures referenced, a) Rudolf Steiner combines miracles 2 and 3 as well as 4 and 5, and b) he does not mention the bodily principles used other than those listed (etheric, astral, higher I). The light grey are additions not mentioned in the lectures. 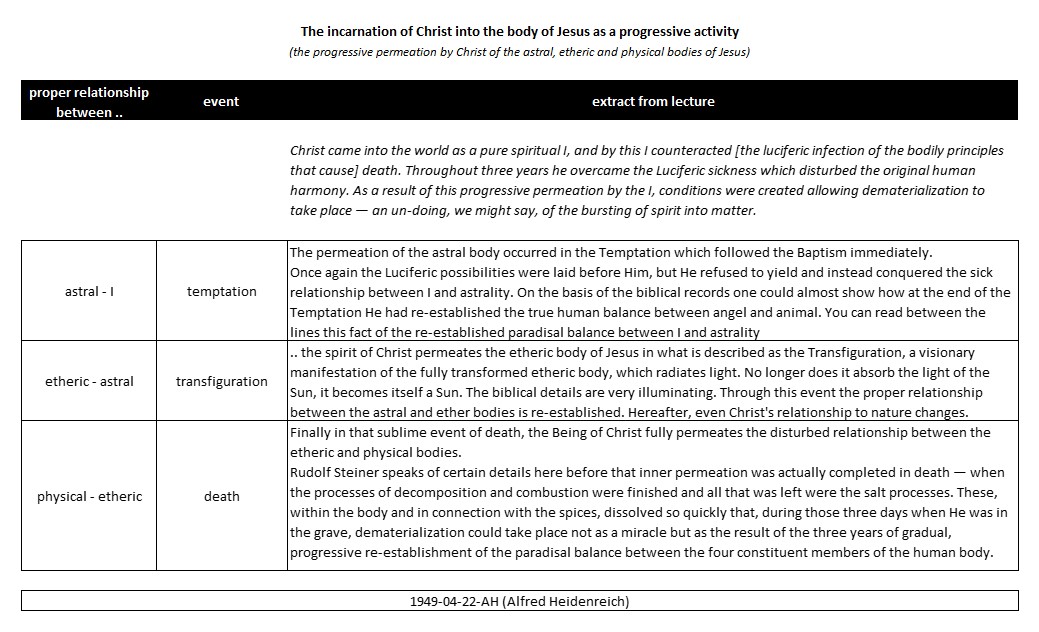 In what manner Christ made such provision for the ages following the Event of Golgotha is related by the writer of the Gospel of St. John. He shows us how, in Lazarus, Christ Himself ‘raised’, ‘awakened’, that Individuality who continued to work as ‘John’, from whom the teaching proceeded in the form described in the lectures on the Gospel of St. John.

But Christ had also to provide for the appearance, in later times, of an Individuality who would bring to humanity in a form compatible with subsequent evolution, that for which men would by then be ready. How an Individuality was ‘awakened’ by Christ for this purpose is faithfully described by the writer of the Gospel of St. Luke. Having declared that he would describe what ‘seers’ endowed with the vision of Imagination and Inspiration could say about the Event of Palestine, he also points to what would one day be taught by another — but only in the future. In order to describe this mysterious process the writer of St. Luke's Gospel has also included an ‘awakening’, a ‘raising’, in his account (Luke VII, 11–17.) In what we read concerning the ‘awakening’ of the young man of Nain lies the mystery of the progress of Christianity.

Whereas in the case of the healing of the daughter of Jairus, to which brief reference was made in a previous lecture, the mysteries connected with it were so profound that Christ admitted only a few to witness the act and charged them not to speak of it, this other ‘raising’ was accomplished in such a way that it might immediately be related. The former healing was an act presupposing in the healer a profound insight into the processes of physical life; the latter healing was an ‘awakening’, an Initiation. The Individuality in the body of the young man of Nain was to undergo an Initiation of a very special kind.

There are various kinds of Initiation.

The Initiation of the young man of Nain was of this kind. His soul was transformed by the event in Palestine but he was not yet conscious of having risen into the higher worlds. It was not until his next incarnation that the forces laid in his soul at that earlier time came to fruition.

In an exoteric lecture names cannot now be given; all that is possible is an indication to the effect that the Individuality awakened by Christ in the young man of Nain subsequently appeared as a great teacher of religion; in later time a new teacher of Christianity arose, equipped with the powers implanted into his soul in a previous incarnation.

Thus Christ provided for the subsequent appearance of an Individuality able to bring Christianity to a further stage of development. Moreover the mission of the Individuality who had been awakened in the young man of Nain is destined to permeate Christianity later on, and to an ever-increasing extent, with the teachings of Karma and Reincarnation — teachings which when Christ was on Earth could not be proclaimed explicitly as wisdom, because the human soul had first to receive them into the life of feeling.

Schema's FMC00.025 and FMC00.281 above illustrate the gradual purification of the body of Jesus of Nazareth by the progressive working of the force of the Christ in the lower bodily sheaths, thereby purifying the blood.

The seven signs or miracles show an ever greater increase of the power in Christ-Jesus, whereby Rudolf Steiner explains it is obviously not the power of Christ that had to develop, but the workings of the Christ power in Jesus of Nazareth (as a result of the above process).

On the other hand however, it is described how the Jesus, and the body of Jesus, became ever-weaker, so that during arrestation and crucifixion Jesus had become a mere shadow of the great Christ-Jesus that had walked the Earth the years before.

This discussion note is about this contradiction and how it is to be understood.

Regarding discussions on the location of Cana in Galilee