The 'reverse ritual' is a term coined by Rudolf Steiner in the lectures of December 1922 (see GA219 references below).

It is a symbolic term to describe the whole wider meaning of the study of spiritual science with heart and soul by modern Man, as the new and reversed ritual of devotion and religiosity for a connection with and towards a communion with the divine.

Or again: how Man through free will and conscious 'free thinking' can raise his soul and spirit to the spiritual world, and connect with the Christ Impulse which is key for further development of Man as a spiritual being; see also Enlivened images

Throughout twenty years of lecturing, Rudolf Steiner insisted on the importance of Man to rise above sensory thoughts and develop free thinking of super-sensory nature, for which the spiritual science offered was the entry pathway. This is a theme that comes back in numerous lectures, mostly together with the MoG. However whereas that way the link and importance is stressed again and again, it may not be obvious to realize why, and all the underlying reasons and implications.

This is further explored from a different perspective in:

Schema FMC00.323 provides an infographic that shows, on the right, the meditation text provides by Rudolf Steiner, with the explanatory quotes taken from the lecture reference shown. Through conscious thinking and the powers of the soul, Man becomes Free Man Creator: and this trans-substantion from the earthly to the future spiritual represents a form of communion. It is called reverse ritual because Man now offers his contribution to the spiritual worlds, instead of performing a ritual with a receiving symbolism. 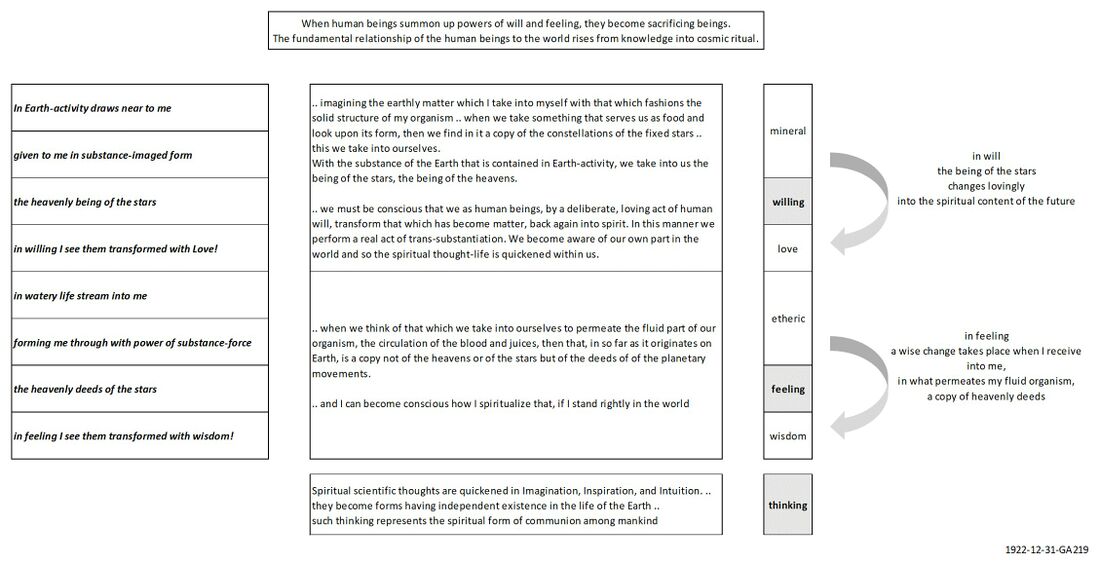 Schema FMC00.393 illustrates the principle of working in groups on spiritual scientific contents filled with feeling and will, and how it represents a reverse ritual (on the basis of BBD of 1923-03-03-GA257, see Communicating over spiritual science) 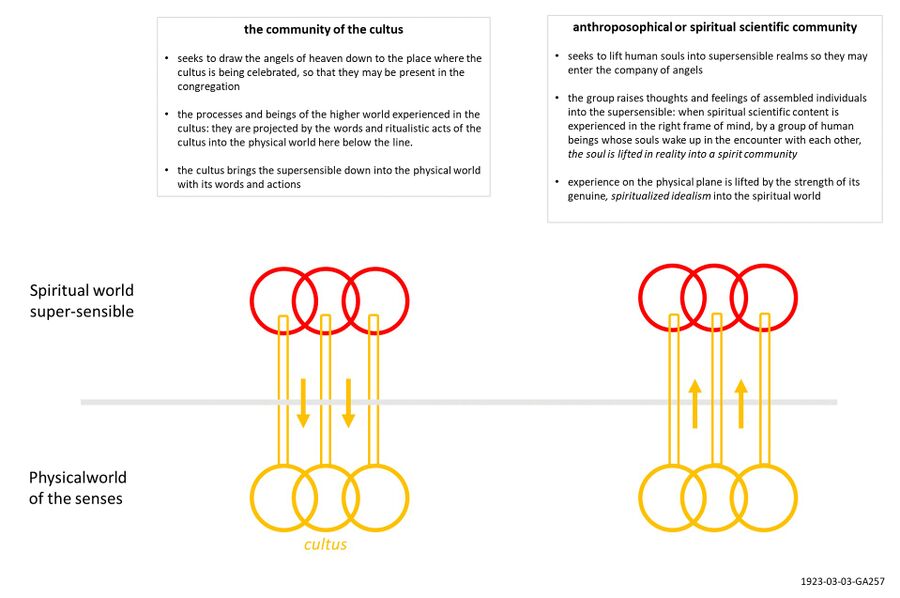 It is not enough to contemplate God, humanity must be divinized by its contemplation: The new religion cannot be simply a passive reverence for God (theosebeia) or an act of worship (theolatreia) but must be activity in and with him (theourgia), a common movement of God and humans to transform natural humanity into a spiritual race, a divine people; it is not a matter of creation out of nothing but of transformation, a transubstantiation of matter into spirit, of the life of this world into the life of God

other translation, taken from 'Soloviev's doctrine of salvation' by Richard F. Gustafson in the book 'Russian religious thought (1996, collection of essays, edited by Kornblatt and Gustafson), reference (3:377) .. Note: exact source not checked, from 1883?

an active action of God (theourgia) .. a cooperative action of divinity and humanity for the re-creation of the latter from the fleshly or natural into the spiritual or divine .. not creation from nothing, but transsubstantiation

(the below includes small wordings merged from two translations of this lecture, no contents changes)

Even as man must derive his reincarnation in another earth-life from that in him which is supersensible and invisible, since his dying physical and etheric bodies are powerless to confer it, so can no future arise for the Earth from the mineral and vegetable globe that surrounds us. Only when we place into the Earth that which she has not herself, only then can an 'Earth of the future' arise. And what is not there of itself on the Earth is principally the active thoughts of man, as they live and weave in his own nature-organism, which holds always a balance and is on this account self-dependent. If he brings these independent thoughts to a real existence, he confers a future on the Earth. But he must first have them.

Concerning these creative thoughts, I wrote in my book 'The Science of knowing', that such thinking represents the spiritual form of communion among mankind.

Spiritual knowledge is thus a veritable communion, the beginning of a cosmic ritual that is right and fitting for the man of today, who is then able to grow because he begins to realize how he permeates his own physical and etheric organism with his astral body and I, and how, as he quickens the spirit in himself, he charms it also into the dead and dying matter that surrounds him. And a new experience is then his.

But as the world presents itself to our immediate vision, it is a dead world. Man transforms it by means of his own spirit, when he shares his spirit with the world, by quickening his thoughts to Imagination, Inspiration, and Intuition, thus fulfilling the spiritual Communion of mankind. It is important that man should become conscious of this. The more lively and alert this consciousness becomes, then more and more we find the way to this spiritual Communion.

I should like to give you today some words that may serve as a foundation for this consciousness, words which, when allowed to act rightly upon the soul — and this means, they must be made to live over and over again in the soul until the soul experiences to the full their moving, living meaning — will then bring something into existence in the human soul which transforms the dead environment with which man is connected into a living one, and quickens the past to life in order that from out of its death may arise the life of the future. This can only happen when man becomes aware of his connection with the Cosmos in the following way:

In Earth-activity — (I am imagining the earthly matter which I take into myself with that which fashions the solid structure of my organism.)

In Earth-activity draws near to me,

Given to me in substance-imaged form,

The Heavenly Being of the Stars.

For it is a fact that when we take something that serves us as food and look upon its form, then we find in it a copy of the constellations of the fixed stars. We take it into ourselves. With the substance of the Earth that is contained in Earth-activity, we take into us the being of the stars, the being of the heavens. But we must be conscious that we as human beings, by a deliberate, loving act of human will, transform that which has become matter, back again into spirit. In this manner we perform a real act of trans-substantiation. We become aware of our own part in the world and so the spiritual thought-life is quickened within us.

In Earth-activity draws near to me,

Given to me in substance-imaged form,

The Heavenly Being of the Stars.

In Willing I see them transformed with Love!

And when we think of that which we take into ourselves to permeate the fluid part of our organism, the circulation of the blood and juices, then that, in so far as it originates on Earth, is a copy not of the heavens or of the stars but of the deeds of the stars, that is to say, the movements of the planets. And I can become conscious how I spiritualize that, if I stand rightly in the world; and I can speak the following formula:

In Watery life stream into me,

Forming me through with power of substance-force,

The Heavenly Deeds of the Stars —

that is to say, the deeds of the planetary movements. And now:

In Feeling I see them transformed with Wisdom!

While I can see how

Man can experience in this way in his will and in his feeling how he is placed into the world. Surrendering himself to the supreme direction of the universe that is all around him, he can carry out in living consciousness the act of trans-substantiation in the great temple of the Cosmos — standing within it as one who is celebrating a sacrifice in a purely spiritual way.

The first beginning of what must come to pass if Anthroposophy is to fulfil its mission in the world is that man's whole relationship to the world must be recognized to be one of cosmic ritual or cult.

A key person to study the religious aspects in the study of spiritual science was Friedrich Benesch (1907-1991), see references below.