What is meant with a study volume?

A study volume is a comprehensive reference work that the earnest student of spiritual student can use for many years and that will accompany and serve him or her even for a lifetime of study. This in contrast to the many short publications that are typical of our zeitgeist and have a smaller scope and are made for consumption with shorter attention spans. This includes even contemporary books that are often in booklet style of say 50-60 pages. Hence, a study volume has a broader scope and is more ambitious, complete in its coverage, including extensive references. Often it is the work of a lifetime of the person who publishes it, as the fruit of decades of study.

In the 19th and 20th century, it was allmost a tradition that some people published their lifetime contribition in a serious volume. Hence we also find these reference works as a product of the first generations of anthroposophists in the 20th century, especially after the second world war.

Most of the references on the list Standing on the Shoulders of Giants or 'SoSoG' are study reference books. Some though also have the broad scope ambition that results in a corresponding physical aspect of a Study Volume.

Positioning in the 21st century

In the 21st century, the explosive growth of the digital internet with free flow of information, has affected the culture and new generations in many ways. Shorter attention spans, less patience and/or quality time to commit to reading and studying a serious volume. Publishing has become much more granular, not only on the internet but also in small booklets.

As the average person spends more time with digital media via different types of computer screens (mobile phone, computer, television), content on demand and the 'pull' of information has become more important than 'push and make available'. People search and browse until they find something and this becomes a type of entertainment, an engrained habit in how people function today.

This site serves as an entry portal to the world of spiritual science: low threshold, searchable, pages with a simple template and a synthetic statement upfront, complemented with aspects, illustrations, source extracts and further reading references.

However the depth of coverage remains limited with relatively general sharing of (often always the same) information (many times all over), and at a certain point one needs to refer to established reference studies and the work of people who have gone in depth in their studies.

This is where SoSoG and the study volumes come in, they are complementary for the student who may pass not years but decades of his life in deepening his personal study and contemplation. An important additional element is that a physical book or study volume is a physical object and a companion along this path, very different from digital resources. One can hold it, annotate, put papers in the book, and carry it along for years.

The working hypothesis from experience is, that for spiritual science the 'consumer publications' do not serve the student in the best way, or do not suffice on their own, and that reference materials are useful and at least complementary, if not required.

In fact we believe that such reference materials have a unique place and value for the earnest student of spiritual science.

Therefore an important aspect of the Free Man Creator vision and intentions, has been from the beginning, to publish the output of the project in Advanced Study Volumes which are a bit less volatile and more practical for earnest students then a website.

This website is a first way to publish, it is a front end or communication vehicle for the Free Man Creator initiative. The site contains (a.o.) three pilot sub-site(s) to guide and support the study process on a specific topic (Christ and MoG, reincarnation, and the Golden Chain), as well as a section for essays.-

However, the Free Man Creator initiative also works on developing a Study Volume library from existing and new materials. To put these in the world so they can continu to exist and be shared and used for personal study offline, thereby representing a 'reference library'.

FMC00.405 illustrates the concept of a Study Volume. Ernst Hagemann published five such volumes between 1963 and 1976, after 30-40 years of anthrosophical study. 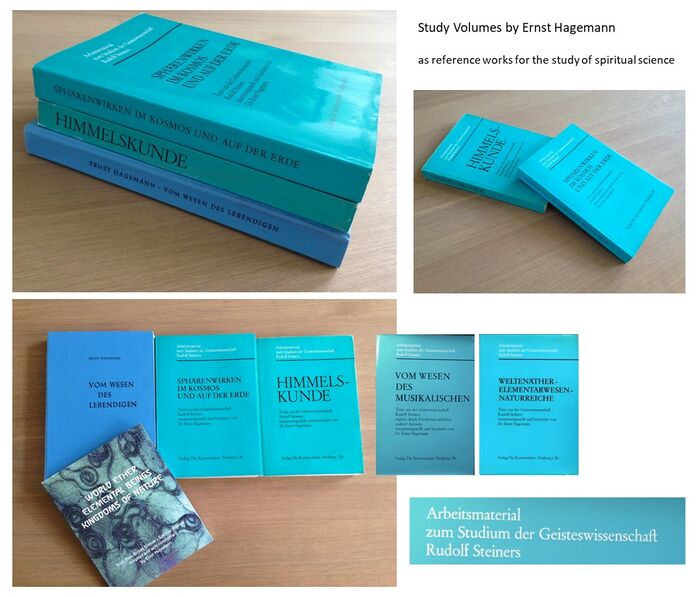 This track of the FMC project initiative has been delayed and received less focus and priority due to the work on the current website.

More background on the Study Volumes and SoSoG in the Free Man Creator initiative in the PDF file downloadable here:

Over 1500 pages have been translated by two translators.

One editor is currently reviewing the translations before publication. The project is still looking for editors.

Contacts with two publishers have been ongoing but no concrete collaboration has followed as yet.