On various occasions, Rudolf Steiner references a phrase from Goethe's Faust where Goethe described a similar concept, eg in 1908-01-27-GA102

What heavenly forces up and down are ranging,

Goethe was able to write this imagination because, when writing Faust, he had come to a certain state of soul that was essential and underlying for understanding this quote. Steiner points out later that maybe Goethe, although initiated in a certain stage of his life, did not see the full explanation that lies in this image but still was able to get the correct image. More info in the quotes below and the Discussion section.

Rudolf Steiner referred to this further with a more elaborate spiritual scientific explanation. This is a good example how an intriguing image or quote can start us off on the learning path.

Schema FMC00.002 below has quotes of that lecture underneath the symbolic imagery from Kirchweger's book. 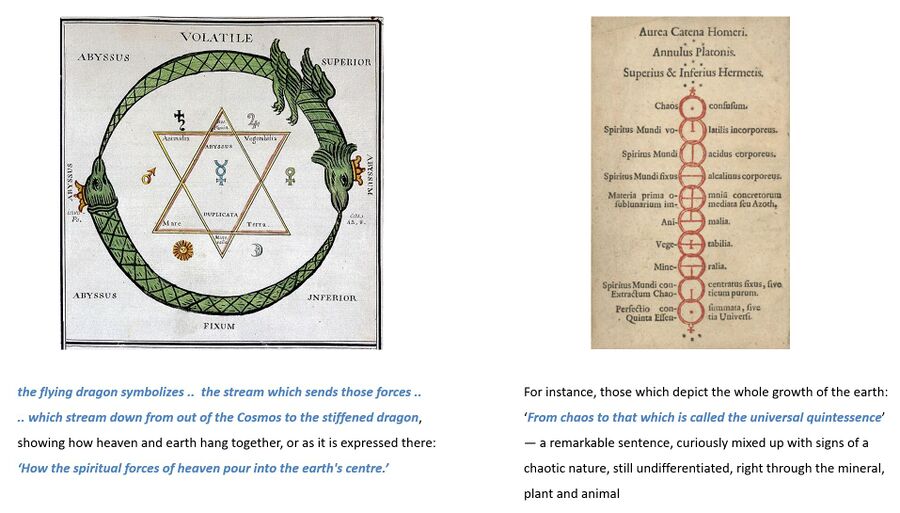 .. So we find Goethe in his 70th year beginning to see himself in the character of Faust. In this character he expressed all the dissatisfaction, and all the sorrow proceeding from the desire for knowledge which remained unsatisfied. And when we look at the first monologue in ‘Faust’ we see clearly what was described at the beginning of to-day's lecture. We see a man who having occupied himself deeply in outer science had reached a state of despair which threatened to shatter his life completely. We see how he seizes on the old book — Goethe called it the Book of Nostradamus, but anyone acquainted with the literature of magic also known to Goethe, will clearly recognize the book to which he referred — in which Faust perceived the sign of the macrocosm and of which he says:

and then added to these words a description of feeling, a kind of rapture that passed through him at the sight of this page. Through all this we see what at that time worked on Goethe. It was possible for such moods and ideas to flow into Goethe's soul, that he could truthfully describe them. When he stood before the remarkable sign of the two interlaced triangles and the two dragons — the upper one representing the spiritual and the lower one the physical — with the signs of the planets in the corners of the interlaced triangles, such forces penetrated through them that he really had the shining planets before him as the golden urns, with the forces flowing between them and filling the All with harmony unceasing.

When we consider Goethe's soul with its deep and honest striving for knowledge, we begin to doubt whether it is possible to have clear ideas or to speculate much about it. We can only try to place the fact before our souls so that any feeling for such things may be satisfied. But anyone understanding life and the way in which it develops through age, knows that in spite of such battles, Goethe was a man in whose soul a germ had been laid which would ripen and bear fruit very much later, in years to come. We see too how the germs which developed later so wonderfully in Faust were really there, and much can be gained from the study of this life by those who have a distinct leaning to spiritual science.

To-day unfortunately such striving is very superficial. We see many people taking it up in a hurry, but they drop it again after having acquired a few ideas. The riddles that exist are only known to one who can look back to a time twenty or thirty years previously when a fluid was poured into his soul and then stored over by the events of the following years and by many experiences, so that only thirty years later he is able to give an approximate answer respecting what was poured in his soul so long before. From this point of view we cannot look too deeply into Goethe's life. We see the echo of his feeling in relation to the ‘Aurea Catena Homeri’ or ‘The Golden Chain of Homer.’ We see it expressed when Faust breaks forth into the words, ‘What a show!’ Yes, a very powerful show, when the soul sinks deeply into these pictures, without even a guess of what they will become in the future. It is a show. But does it stop at mere guessing? ..

The symbol of the dragon is touched on after describing the rosecrucian symbol or the rose and cross:

.. the key is to go deeply into the presented image, to dive and sink in and not just try to imagine an image .. the key of Solomon, above a white flying dragon, below a black one that dies.

At that time there was one book, The Golden Chain of Homer — Aurea catena Homeri. When opening this, one finds a remarkable symbolic drawing — a dragon full of life in the upper half circle bordering on another dragon, one which is dried-up and dying. Various signs are connected with this: symbolic keys, two intersecting triangles and the planetary signs. All this is mere fantasy for our contemporaries of a scientific bent, because they know not what to do with them. Goethe feels that they represent something. They do not express directly something to be found here or there in our world. But if these symbols are allowed to work upon us by, so to speak, becoming blind and deaf to our physical environment, letting only these signs act upon us, then we experience something highly peculiar — we feel, that the soul becomes aware of something that has been asleep — like a spiritual eye which has opened. And if one has sufficient perseverance, one takes to what is called meditation and concentration which so develop the soul that, as an actual fact, something like a spiritual eye operation is performed and a new world makes its appearance. Such a new world could not disclose itself to Goethe at that time, for he had not developed so far. But in his soul arose a presentiment that there exist keys for that spiritual world and that one can enter it.

We have to realize this mood of Goethe's: The living sensation or feeling; something within me becomes active, compelling me to the belief that something exists which leads into the world of spirit. But simultaneously he feels his powerlessness to enter that world. If at anytime Goethe had been identical with Faust, we could say that he was in the same position as Faust when we see him at the beginning of the first part, where Faust, after studying the most varied departments of science, opens books containing those signs and symbols, feels himself encompassed by a spiritual world, but lacks the means of entry. But Goethe never was identical with Faust in that way; one part of him was Faust, but he himself grew beyond that part of himself. And so developed that which transcended Faust, through his disregard of any inconvenience, more and more and his continuous striving brought him to the conclusion that one cannot get behind the secrets of existence at one bound, not through formula and incantations, but through the patient and energetic effort to penetrate all that surrounds us in the physical world — gradually, step by step — with a true, psycho-spiritual perception.

It is easy to say: this higher knowledge must arise in the soul. True, but it arises in its true form only if we are striving with patience and endurance to recognize, step-by-step, the real nature of the phenomena of the physical world and then, behind them, seek the spiritual. But Goethe could compress all this, could see it all in a different light, with what he had gained in his Frankfurt period.

This also links to 'living with questions' as an appropriate soul characteristic for spiritual scientific study.

If we open our souls to the impressions which may come to us from the content of these pictures, then at the same time there will come to us much that has been experienced in the course of human evolution as an echo of old, instinctive clairvoyance; to-day this is sometimes treated historically, but fundamentally it is not understood. Real poets and spiritually inspired men lay hold of these often wonderful voices which sound from the traditions of the past, and make use of them just when they wish to express their highest and greatest conceptions. But even then they are very little understood.

So in the first part of Faust there rings out a wonderful saying which is scarcely at all understood, though it is quoted often enough. It occurs when Faust, having opened the book of Nostradamus, comes upon the sign of the Macrocosm:

How each the Whole its substance gives,
each in the other works and lives!
See heavenly forces rising and descending,
their golden urns reciprocally lending:
on wings that winnow sweet blessing
from heaven through the earth they're pressing,
to fill the All with harmonies caressing.

Rudolf Steiner points out later that maybe Goethe, although initiated in a certain stage of his life, did not see the full explanation that lies in this image but still was able to get the correct image. A similar observation was made when commenting on Wagner.

It means that the process of developing imaginations or receiving inspiration has a content which is richer and more correct than even the receiver can see, know, or realize.