This is not just a very important topic, it is absolutely crucial, one can say it is pivotal to grasp this deeply.

The Luciferic effect influenced 'the original plan'. It brought the possibility of freedom, but also of error. Question for contemplation: how then was true divine love conceived if not with the freedom brought by the luciferic 'infection'? It also blocked access to the tree re two higher ethers.

Jehovah counterbalanced as one of the Elohim/SoF and this way a balanced system Sun-Earth-Moon was constituted. Also see the page for the heart circulations Heart-Lungs-Brain. We live in the middle of this forcefield of opposing counterbalancing etheric influences, that work in us.

At the same time the SoF rippling in brought about the I consciousness, in the epochs Lemuria and Atlantis.

The MoG then came to infuse buddhi into this constellation and gave Man access to the two higher ethers again.

The Emerald Stone .. The sun and the moon

In order that love might develop on earth the body had first to be developed at a primitive stage. Love had to be inaugurated in the lowest form as sex-love, .. All lower love is schooling for the higher love

The lowest rank of these Elohim is the Jehovah stage. Jehovah therefore is an actual Moon divinity, who on the Old Moon passed through physical development. … The name Jehovah does not designate a single being, but a rank in the order of the hierarchies

So too those beings who “trickled” down wisdom from the periphery of the Moon became capable of a higher evolution when the Moon became Earth; they ascended higher. The beings who at that time were able to let wisdom trickle into the Moon-beings were in fact those who were so advanced at the time when the sun withdrew from the earth that they went out with the sun and made it their scene of action. The beings who on the Moon were spirits of wisdom — the wisdom that trickled down — were not the Spirits of Wisdom which have been so named in connection with Saturn — these spirits, or at any rate a great number of them, chose the sun as their theatre. Only the Being whom one designates Yahve or Jehovah, who had reached full maturity on the Moon, became the Lord of Form on the Earth, the Regent of the Moon forces.

About the flow of this page

propose two lectures, the GA201 with the heart anf flows, and then 1904 below .. to 'set the scene' then backlight the streams with the arrows below 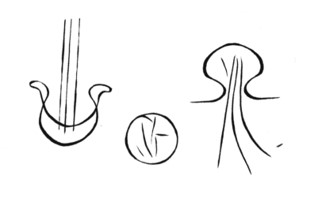 and through it, we see that Jehova gave a first version of the divine love, but only a reflection,

- whether this maps to the love of blood relations, a precursor of the divine love or buddhi of christ

To introduce the core or central theme of this post, an extract from this Hieroglyph lecture 14 of 1920-05-14-GA201, where Steiner describes how the form of the human heart is the result of the interaction of two opposing flows.

• Here we see the gradual divergence of the solar and the stellar astronomy. As we have seen, if we have one astronomy only, everything falls into confusion. We can only reach a right understanding if, not limited to one astronomy, we say: On the one hand we have the starry system which, in a certain respect, contains within it the Moon; and on the other, the system to which the Sun belongs. They mutually interpenetrate. They work together. But we are wrong if we apply the same law to the two. • When we realise that we have two quite different astronomies, we shall say: The cosmic happenings in which we are involved have two origins, but we are so placed that these two streams flow together in us. They fuse in us human beings.

So bottom line: Steiner sketches us, for our imagination:

• two whirling flows in opposition, one upward and one downward, with difference velocities .. as the key to condensation of matter or the formation of form• a key point that Steiner keeps coming back to in many lectures, is the difference in velocity between the different spiritual influences such as in this case the sun, moon and stars. This can be done by using the language of the spheres (Sun, Moon, ..), symbolic spiritual nomenclature (Jehovah, Lucifer, ..), or referring to the influences they represent (streams, or what we called 'wavefronts' - more on this later).

And also in many lectures he explains how the influence of Sun and Moon is modulated by the planets.

As the above is such a key topic in Steiner's lectures, we add the rephrased version (as the 'Lucifer-Jehovah' topic) from the above lecture 14 of 1920-05-14-GA201 where he summarizes as follows:

• it is Jehovah who brings it about that the sun lingers behind the stars and, with the force which the Sun thus kept back, He fashioned the human form, which is His earthly image.

Thus, mark well, the stars run their course quickly, the Sun more slowly, and so a slight difference arises which, according to these ancient Mysteries, was that which produced the human form

see also:Two streams and timelines where the MoG is seen as having its own timeline not related to the 'usual' astronomy of cosmic influences

when considering Man on Earth, and to fully realize what is described with the etherization of blood .. we need to understand the background picture and processes against which we need to project and superimpose this Christ Impulse

from CH06 the first one:

We could have asked: OK, so we imagine we're talking, with these flows, about etheric flows. But what etheric flows .. we learned about four different ones (warmth, light, chemical, life). That question was actually never answered .. So now read the lecture below:� 1921-04-12-GA313 very interesting ethers in human being read in full FMC – moved to lawfulness essay What happens when these processes, which are quite normal in origin — processes like eating, digesting, working through the food in the abdomen, passing it on to the head, etc. — continue beyond the limit normally set by man's organization. In the undernourished person, because of the irregularity arising below, and in the over-nourished person, because of the irregularity above, there results an abnormal cooperation between the two kinds of ether.

Again, if we look at the other kind of ether that works from within, we find that its excessive action has an overall softening effect on the human being. While in the opposite case the poisonous effect makes the human being etherically rigid, this other effect makes him dissolve. Too much life is poured out over him, and too much of the chemical pole. He cannot subsist, and he grows soft. These are two polar effects: the poisonous effect and the softening effect. If you regard the human being in this way, you are led to ask, “What is a human being really?” In so far as he is physical, he is an organic being who keeps apart, in the proper way, the two kinds of ether and lets them cooperate in the right way. The entire human organization is constituted so as to allow the two kinds of ether to cooperate in the right way. We are now able to understand better my statement that the human being is thoroughly organized. Indeed, it is obvious that he is inwardly differentiated — which is to say, organized — with respect to water, to air, and to warmth.

light and warmth ethers on the one hand, pressing centripetally from above downward, and

life and chemical ethers on the other hand, pressing centrifugally from below upward.

See 1909-GA155 where P and E lateral and A and I axially with the earth (above/below human being). Try mapping.

See GA 115 of 1909 L3 in full in FMC P from the left, and E stream from the right A stream from below, and I from above After: sentient soul from one side, and sentient body from the other Consider the drawing of the two flows with which we started this essay

link to blinders on and infusion