Epochs in Earth physical round

This page takes a perspective 'across evolutionary epochs' to have a view on a number of streams spawing multiple epochs:

It allows for a good overview:

First, the departure and reunion of both the Sun and the Moon is important to realize that the spiritual beings, including the SoF/Elohim, were all in one cosmic body. In previous planetary stages they had developed together alongside.

Now, in the Hyperborean and Lemurian epochs, both the Sun first, and afterwards the Moon, separate off and the Earth is now in a cradle held between Sun and Moon influences from outside (whereas previously influences were from the same sphere).

The MoG Christ Impulse instigates the process towards reunion with the Sun. 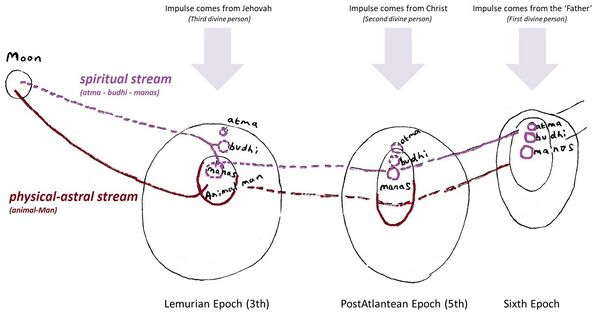