Welcome to the anthroposophy.eu wiki website, first installed in March 2018 as a trial and test publishing platform to share information about the FMC project.

The FMC project work is focused on 'the mother' or 'core anthroposophy', and not on the application areas (such education, biodynamic agriculture, etc.). The latter are therefore not covered in depth, as much more exists already for this in the world.

Rather, the inspiration is to see the spiritual scientific teachings as a contemporary version of the Mystery School tradition going back all the way from the old Egyptian and Greek mystery centres upto the School of Chartres. More about this here.

The scope is to cover the full extent of the spiritual scientific worldview and teachings, and this is structured into six main domains, fields or work areas:

The first three are core and make up one whole (see drawing). 'WorldView Spiritual Science' builds on this foundation and brings the spiritual foundation knowledge to our experiential and practical world (nature's kingdoms, degrees of consciousness, music, ..). 'Initiation' is about practical exercises and the great work on one's Self. The last one is really an extra addition, 'The Michaelic stream' is about the story of spiritual science throughout the ages, from the ancient mystery schools to contemporary anthroposophy, and its link with Michael and the Christ Impulse. As one gets deeper into spiritual science, one realizes one's connection with this stream and/or one's personal karma. 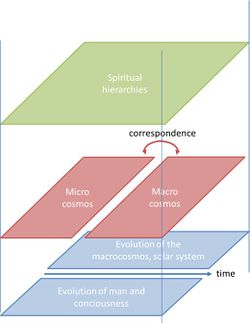 Each work area is made up of 'logical chapters', whereby each logical chapter or theme can be considered to consist of at least one (or more) study volume(s).

The intention of this site is to be a front-end portal to inform about the project and provide more details on the initiative to interested parties .

This is not to a full-fledged content management system for the FMC project. The site will use schematics and embedded files as much as possible.

1/ This site, as a front end communication vehicle for the initiative

2/ Advanced Study Volumes - existing content that is part of the SoSoG vision, translated, edited and published by the project

3/ SoSoG: 'best of' anthroposophical secondary literature, complementing the GA Collected Works with the life work of great anthroposophists in one century of spiritual science, hence the acronym Standing on the Shoulders of Giants (SoSoG)

5/ Output from the FMC project, published in the format of the Advanced Study Volumes

no partial snippets of fastfood for quick digestion (a.i. social media, blogs) .. but rather quite the opposite. Engage one's soul and spirit into longer process of concentration through depth study.

But rather: reference work, to be worthy of real reference work. This puts the standard quite high, given what is required to be entitled of that ambition.

Nevertheless: main motivation: that is may be useful to, and may help, other students.