Difference between revisions of "Last Supper by Leonardo da Vinci"

The Last Supper or Holy Supper is one of the most famous paintings on earth, and contains intriguing symbolism that has been the subject of a wide range of literature and speculation.

The meaning of the painting comes to live in the symbolism of the twelve apostles and how it relates to old rites of initiation. The twelve apostles represent future stages of human development, and can be linked to future cultural ages. 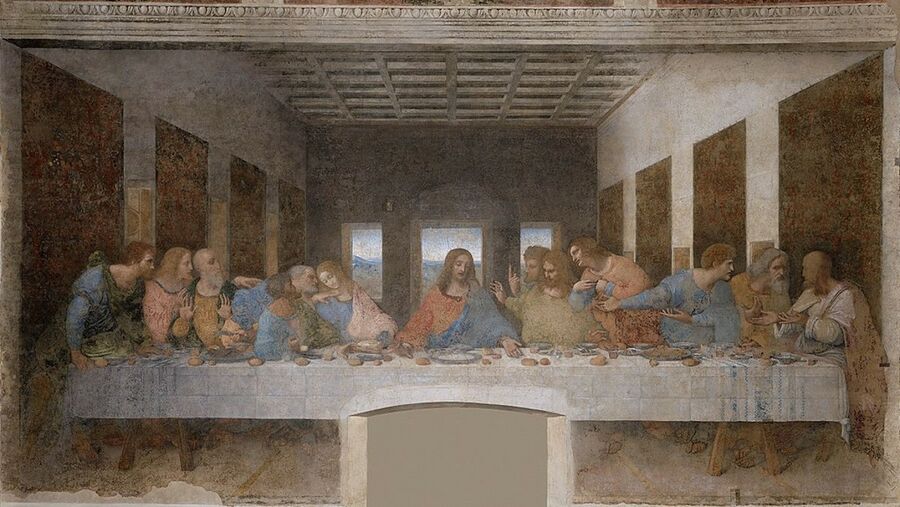 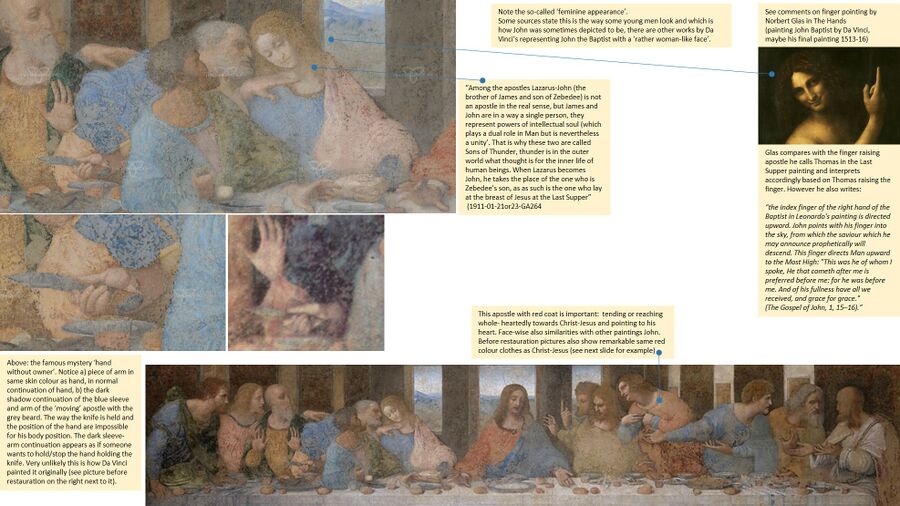 Schema FMC00.021B shows the current painting as well as (right) a comparison with the original after the numerous restaurations in the last century. 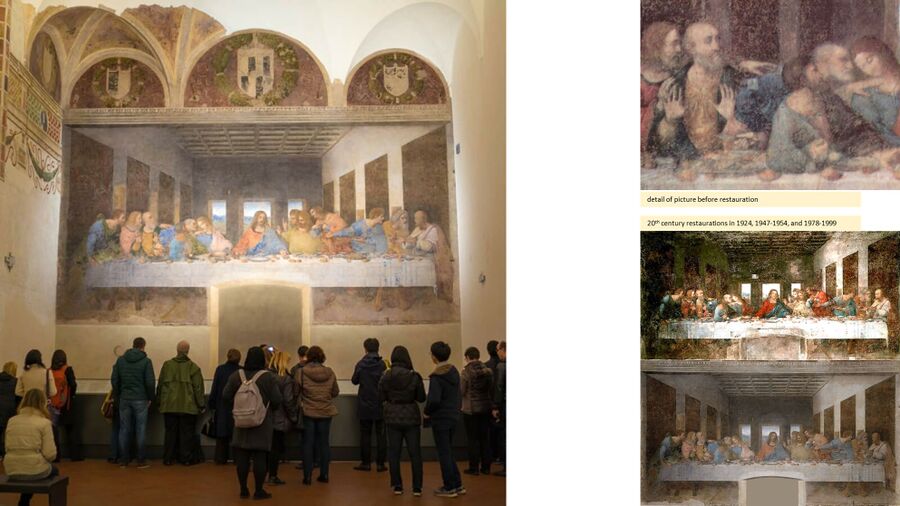 It is quite natural to think of one of the most famous paintings that exists and depicts the subject of study here, as indeed this painting is said to contain much more than we see or can understand, as we read in 1922-08-27-GA214

Thus it will be indispensable to turn attention in our time once more to this the greatest question of mankind, inasmuch as the essence and meaning of the whole evolution of the Earth lies in the Mystery of Golgotha. I would fain express it in a parable, however strangely seeming.

Imagine some being descending from another planet to the Earth. Unable to become an earthly man, the being would in all likelihood find the things on Earth quite unintelligible.

Yet it is my deepest conviction, arising from a knowledge of the evolution of the Earth, that such a being — even if he came from distant planets — Mars or Jupiter — would be deeply moved by Leonardo da Vinci's picture of the Last Supper.

For in this picture he would discover that a far deeper meaning lies hidden in the Earth — in earthly evolution. Beginning from this deeper meaning which belongs to the Mystery of Golgotha, the being from a distant world could then begin to understand all other things on Earth.

The name of Leonardo is constantly being brought before the minds of innumerable people through the wide circulation of perhaps the best known of all pictures, the celebrated “Last Supper”. Who does not know Leonardo da Vinci's “Last Supper” and knowing it, does not admire the mighty idea expressed more particularly in this picture? There we see embodied pictorially a significant moment — one that by innumerable souls is considered the most significant of the world's events: the figure of the Christ in the center, and on either side of Him the twelve Disciples. We see these twelve Disciples with deeply expressive movements and bearing; we see the gestures and attitudes of each of the twelve figures so individualized, that we may well receive the impression that every form of the human soul and character binds expression in them. Every way in which a soul would relate itself according to its particular temperament and character, to what the picture expresses, is embodied in them.

In his treatise on the subject of Leonardo da Vinci's “Last Supper”, Goethe expressed perhaps better than any writer the moment after Jesus Christ uttered the words, “One of you shall betray me”. We see what is taking place in each of these twelve souls, so closely connected with the speaker and who look up to Him so devoutly, after the utterance of these words; we see all that wonderfully expressed by each of these souls in the numerous reproductions of this work which are disseminated through the world.

There have been representations of the “Last Supper” dating from earlier times. We can trace them without going still further back, from Giotto down to Leonardo da Vinci; and we find that Leonardo introduced into his “Last Supper”, what we might call the dramatic element, for it is a wonderfully dramatic moment that confronts us in his representation. The earlier representations appear to be peaceful, expressing, as it were, only the fact of being together. Leonardo's “Last Supper” seems the first to conjure up before us with full dramatic force an expression of very significant psychic conditions.

However in this same lecture:

If we let his “Last Supper” work on us, we find two things of which we can say that they do not altogether agree with Leonardo's view of the principles of painting.

One is the figure of Judas. From the reproductions and also to a certain extent from the shadowy painting in Milan, one gets the impression that Judas is quite covered in shadow — he is quite dark. Now when we study how the light falls from the different sides, and how with regard to the other eleven disciples the lighting conditions are represented in the most wonderful manner in accordance with reality, nothing really explains the darkness on the face of Judas. Art can give us no answer as to the wherefore of this darkness. This is fairly clear as regards the Judas figure.

If we now turn to the Christ Figure, approaching it not according to Spiritual Science but according to the external view, it only produces, as it were, something like a suggestion. Just as little as the blackness, the darkness of the Judas figure seems justifiable, just as little does the “sunniness” of the Christ Figure, standing out as it does from the other figures, seem to be justified, in this sense.

We can understand the lighting of all the other countenances but not that of Judas nor that of Christ Jesus.

Then, as if of itself, the idea comes into one's mind: surely the painter has striven to make evident that in these two opposites, Jesus and Judas, light and darkness proceed not from outside but from within. He probably wished to make us realize that the light on the face of the Christ cannot be explained by the outer conditions of light, and yet we can believe that the Soul behind this Countenance is itself a light force, so that It can shine of Itself, in spite of the lighting conditions. In the same way the impression with respect to Judas, is, that this form itself conjures up a shadow which is not explained by the shadows around it.

This is, as already said, a hypothesis of Spiritual Science, but one that has developed in me in the course of many years and we may believe that, the more we considered the problem, the more we would find it substantiated.

We now come to the Last Supper — which he created, it is true, at an earlier time, and worked upon during a long period. We have often spoken of it. We know what an essential progress in the artistic power of expression is visible in this picture as against the earlier pictures of the Last Supper by Ghirlandajo and others. Observe the life in this picture; see how strongly the individual characters come out in spite of the powerful unity of composition. This is the new thing in Leonardo. The adaptation of the strong individual characters to the composition as a whole is truly wonderful. At the same time each of the four groups of disciples becomes a triad complete and self-contained; and, again, each of these triads is marvellously placed into the whole. The colour and lighting are inexpressibly beautiful. I spoke once before of the part of the colouring in this composition. Here we look deep into the mysterious creative powers of Leonardo. If we try to feel the colours of the picture as a whole, we feel they are distributed in such a way as to supplement one another, — not actually as complementary colours, but in a similar way, — so much so that when we look at the whole picture at once, we have pure light — the colours together are pure light. Such is the colouring in this picture.

The cosmic and earthly: the etheric Sun space

Olive Whicher, from a study of the etheric with projective geometry, presents a comparison (see figure below) between [2] the foundation pattern of the Villa Rotunda in Venise (book 'Rose Windows' by Painten Cowen) and the mathematical ideas from projective geometry, the growth factors due to etheric laws that one also finds in spirals [1]:

if continued inward, the interwoven pattern of squares and circles would leave to what we have called an innermost point at infinity, a centre of ethereal space or Sun space.

The secret of the painting lies in the interpretation of circles and squares, of the cosmic and the earthly. As we eliminate the lines, which have been drawn into the picture, we see them light up again in spirit. If we think about (the circle and square) in the spirit of Leonardo, we know that we are dealing with an invisible figure expressing a deep truth. Through the circle, the spirit of the universe permeates the depths of the earth, whose laws come to expression in the square. It is in the interpretation of earth and heaven that the meaning of the Last Supper is clothed.

There are very many versions of interpretations and patterns that are 'seen into' the Last Supper.

Here is one example. In this case, attention is given to the perspective lines starting from the Christ (no not 12). Then a dodechedron is presented as the symbol representing 12 times 5 pentagons. The pentagram is the symbol of the human being, whereas Christ is represented with the divine twelve. Rudolf Steiner used the dodecahedron in the Foundation Stone ritual on 25-Dec-1923. Many more of such perceived geometries exist, it may be hineininterpretierung, or not.