Difference between revisions of "Cosmic breathing"

In the other sections, we have introduced a framework consisting of spiritual entities acting from and interacting between various worlds. In this section we focus on how this happens, as perceived from our human earthly perspective and sensory consciousness. Meaning: along the time dimension, and in the various rhythms in nature.

We introduce this with a juxtaposition of three themes:

The goal is to build an imagination of the eternal dynamic in the macrocosmos by seeing how all the above are linked. And seeing that we can transpose our human breathing and development process to the other hierarchies and the different stages of evolution.

Schema FMC00.035 quotes the Bhagavad Gita to describe classes of elementals linked to the rhythms of the year (sun), the month (moon), and day (earth).

.. associate the Zarathustrian world-picture with “Chronology”: it looks beyond the two Beings, Ahura Mazdao and Ahriman, to the workings of Time — Zervan Akarana.

Not the abstract Time we think of today, but Time viewed as a living, super-personal Being. From this Being proceed the rulers of Time;

The Zarathustrian consciousness looked at the wonderful harmony which works through forces and is symbolised numerically by all the relations and combinations which result from the interweaving of 28 to 31 with 12. It looked into all that streams into the world and resounds through it, because in the great world-orchestra the instruments sound harmoniously together in these numerical relationships. For the Zarathustrian world-picture this appears as the ordering and harmonising principle in the cosmic order. ... And because in that which creates, and nourishes itself in creating, in that which takes the world-pictures into itself, absorbing them spiritually and carrying them over to higher stages — because the Zarathustrian outlook sees in “Time” something living and super-personal — so, while spiritualising the term, we may call this world-picture “Chronology”, whereby we are led to think at once of the god Kronos, the Regent of Time. ...

.. And what followed in Greece or in the Graeco-Latin epoch? .. the Greeks reverenced Apollo, the reflection of the Nathan Jesus-child as he had been at the end of the Atlantean time. It was out of the Hyperborean land, from the North, that Apollo came to the Oracle at Delphi. Through the Pythia, in summer, he spoke the most important things that the Greeks wished to hear. In the autumn he returned to his Hyperborean land. We connected this journey of Apollo with the journeys of the sun; but it is the spiritual sun that speaks through Apollo, and the spiritual sun goes away to the north, while the physical sun goes to the south. The myths are seen to be endlessly full of wisdom if they are considered in the light of true occultism. But in revering Apollo the Greeks did not look on the sun as his visible sign in the heavens; Apollo was not a sun god in this sense. For a god symbolised by the external sun the Greeks had Helios; it was he who regulated the course of the sun in the sky.

Even if we take only the physical sun into account, we find that its influence on earth-life is not confined to the direct effects of its rays. The sun works in the first place through air and water and water-vapour, and so through the vapours which (as we have seen) rise from the site of the Castalian spring and coil round the neighbouring hillsides like a dragon — the dragon killed by the Greek St. George. The sun works in all the elements, and after it has worked into them, inoculated them, its activity plays out from them on to human beings, through the servants whom we call elemental spirits. In the elements the Sun-Spirit is actively alive, and this is the activity the Greeks saw in their Apollo.

Thus for the Greeks Apollo was a sun god, but not the Helios who drove the chariot of the sun across the heavens and to some extent regulated the times of the day. In Apollo the Greeks saw the sun's activity in the atmosphere, and this activity they addressed as Apollo when they addressed it spiritually. And so it was with many gods and spiritual beings whom we find in the West. I could mention many, but we need point only to Wotan with his wild host, rushing through the storm.

25920 - the rhythm of Man, and how it is linked to the cosmic rhythm of Earth and Sun

Schema FMC00.027 gives an overview of the various rhythms in nature and Man coupled to the number 25920: 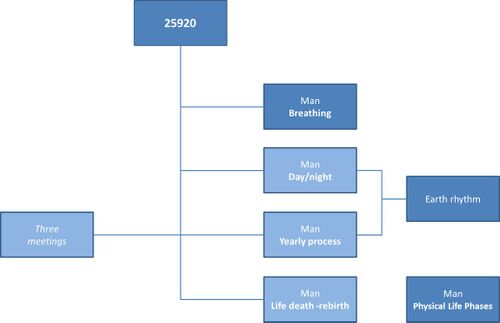 The cosmic rhythm can be introdued through the number 25920 by considering:

(c) - the Rhythm of a year, the four seasons, the great festivals

(d) - Man's cycle of reincarnation, of life between birth and death, and between death and re-birth, whereby each life represents one breath of a 'Great Being that breathes us in and out, again in a rhythm determined by the number 25920 - the sun's course around the Zodiac in 25920 years or one platonic year

(e) - the 'three meetings': Man has three touchpoints with his higher Self: one is daily (Spirit Self), one yearly (Life Spirit) and the third once in a human life (Spirit Man), that connect (b) and (c) and (d)

.. and in this sequence also add for our consideration:

(f) - the cycle of manvantaras and pralayas in the different planetary incarnations, with reference to the cosmic breath of Brahma.

Spiritual hierarchies and their eigenperiods

Planetary stage dynamic with Conditions of Life and Form, mantavaras and pralayas

This is discussed in more detail in the Evolution section, this however summarizes it in the contextual perspective of Cosmic Breathing.