The human heart as a future organ

The human heart is not just an organ like all the other organs in our physical body. It is the organ of the 'will' and is a voluntary muscle in development that will become ever more important in future evolution. It will ultimately become the organ of expression through which Man will 'speak the Word' and create, and emanate his own being in sacrifice.

See also the first apocalyptic seal on Book of Revelation.

The heart will develop to be a buddhi organ, see Kundalini as well as Schema FMC00.178 on Etherization of blood, and Man past and future for a description of Man's physiology in the Sixth epoch and seventh epochs.

Schema FMC00.179 are illustrations to Ehrenfried Pfeiffer's Heart lectures of 1950 (see references below). On the left the yellow is much more intensive, on the right there are seemingly hands from the sky and an additional chamber or circuit on the upper right.

See also Schema FMC00.326 on Kundalini: at the height of the heart chakra, behind it, lies what is annotated by Rudolf Steiner as 'here lies the source to the kundalini fire'. 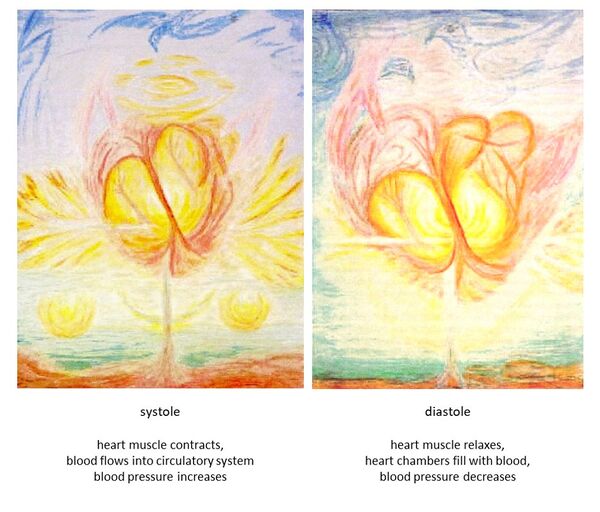 Schema FMC00.179 shows the first apocalyptic seal, with Man as a future creative God, able to develop himself - this is represented by the fiery sword that projects from the mouth of the figure. His planet and everything will consist of fiery matter then, hence the feet of flowing metal.

Left, the base version by Levi, middle by Clara von Rettich and right by Arild Rosenkrantz.

To appreciate why it is shown here:

People do not believe this yet, but they will believe it someday. What can work only as the Christ-power within the human heart now will someday effec­tively penetrate the entire cosmos

On the longer term: 1904-06-15-GA090A explains how the heart and organs of circulation will become a new important organ of expression in the fifth and sixth Condition of Life. These CoL already give an early outlook of future evolution in planetary stages, even though that will be under totally different conditions.

Just as Man today radiates the spoken word, one day Man will radiate and express his whole inner being, and it will be impossible that Man separates his own well-being from that of others. Just as the word currently radiates manas, so budhi will be radiated through the heart and comprise it directly. Those who will not have reached this evolutionary goal, will be savages as this is the normal development.

Today it is still possible to hurt and wound with the spoken word, with the breath of the heart this will be impossible. We have to transform the word so it can not wound any more, as is said also in Light on the Path: 'Before the voice can speak in the presence of the Masters it must have lost the power to wound'. This to the purpose that the not-wounding word retreats to its inner core and develops the heart. ..

.. just as the organ of the larynx will be transformed, so too will the human heart.

It is the organ which stands in intimate connection with the circulation. Now science believes that the heart is a kind of pump; that is a grotesquely fantastic idea. It is the feelings of the soul which give rise to the movement of the blood; the soul drives the blood, and the heart moves because it is driven by the blood. Thus the truth is exactly the opposite of what materialistic science states. Man today, however, cannot guide his heart as he will; when he feels anxiety, it beats faster, since the feeling acts on the blood and this quickens the motion of the heart. But what is suffered involuntarily by man today, will later, at a higher stage of evolution, be in his own power.

Later on he will drive his blood by his own volition, and cause the movement of his heart as today he moves the muscles of his hand. The heart with its peculiar structure is a crux, a riddle for modern science. It has diagonally striped fibres, which are otherwise only to be found in voluntary muscles. Why? Because the heart has not yet reached the end of its evolution, but is an organ of the future; because it will in the future be a voluntary muscle. Thus it already shows the rudiments of this in its structure.

All that goes on in the soul changes the organism. And if you now imagine the Man who is able to create his own likeness through the spoken word, whose heart has become a voluntary muscle, who will have altered yet other organs, then you have a conception of the future of the human race in future planetary incarnations of our Earth.

Humanity will progress on our earth as far as it is possible under the influence of a mineral kingdom. This mineral kingdom, in spite of its having arisen the last, will be the first to disappear again in its present form. Man will then no longer build up his body from mineral substances as today, the coming human body will only incorporate into itself substances of a plant nature. All that works in man today, as mineral will disappear. In order to give you a seemingly grotesque example: the human saliva of today is a mineral product, for the physical body is an inter-action of mineral processes. When man will have ended his mineral evolution he will no longer have a mineral spittle; it will be of a plant-nature — man will, so to speak, spit flowers. Glands will no more secrete what is mineral, but a plant-like substance. The mineral kingdom is brought to an end by the evolutionary return of humanity to plant-like existence.

Thus the human being lives over to Future Jupiter inasmuch as he expels all that is mineral and passes over to the creativeness of the plant. And inasmuch as he then later passes over to animal-creation — the animals will be different from those of today — when his heart will have progressed so far that it can appear as a creator, then he will create in the animal world, as today he creates in the mineral kingdom, ...

..and then the Venus condition will arise. And when he can create his kind by virtue of uttering his own likeness, then is the meaning of evolution complete, then is the word fulfilled: “Let us create man in our own image.”