References to the concept of the Golden Chain

Although Homer only uses once - in the Iliad - the image of a golden chain hanging from heaven and connecting the human and the divine, this image has inspired all traditions since, with Plato before and Macrobius after Christ, upto the middle ages with Ficino and Valeriano upto Kirchweger and Goethe.

Though the Golden Chain or 'Catena Aurea' was coined by Homer and was used as a reference from the Old Greek throughout the middle ages, it really flows into the processes of Alchemy such as we find in Rosecrucian and Hermetics tradition, and in fact we find symbolic references even in the Bible.

Homer's golden chain is an important image and concept, also for this website to provide a modern education on its meaning and the spiritual reality it represents. Therefore is worthwhile to appreciate this tradition, and the fact this metaphoric image has inspired generations for more than 2000 years.

Schema FMC00.075 combines illustrations from Rosecrucian and Hermetic and alchemical traditions: observe the Golden Chain and the 'raining down' on the upper left, the Sun and Moon as Father and Mother (see Emerald Table below) and how their 'two streams' gives rise to the four elements (middle picture) from whose combination follow the three alchemical processes in nature (below right and left). 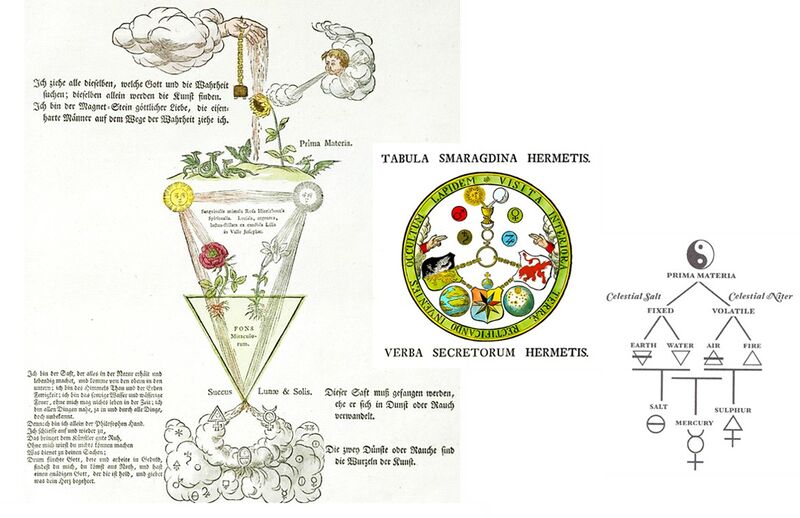 I am the living bread of life that came down from heaven.

Its Father is the Sun; its Mother is the Moon; the Wind carries it in its womb; and its nurse is the Earth. This Thing is the Father of all perfect things in the world. Its power is most perfect when it has again been changed into Earth. Separate the Earth from the Fire, the subtle from the gross, but carefully and with great judgment and skill. It ascends from earth to heaven, and descends again, new born, to the earth, taking unto itself thereby the power of the Above and the Below. Thus the splendor of the whole world will be thine, and all darkness shall flee from thee. This is the strongest of all powers, the Force of all forces, for it overcometh all subtle things and can penetrate all that is solid. For thus was the world created, and rare combinations, and wonders of many kinds are wrought.

Hence I am called Hermes Trismegistus having mastered the three parts of the wisdom of the whole world. What I have to say about the masterpiece of the alchemical art, the Solar Work, is now ended.

In the Iliad (often dated around 8th centiury BC), Homer speaks about the chain that links earth and heaven, and by which humans may ascend to the realm of the gods. In this passage Zeus declares that all the gods and goddesses together could not, with a golden chain, drag him from on high, but that if he pulled, he would drag them, with earth and sea, would then bind the chain round the summit of Olympus, and all the rest would hang aloft. Quote from Iliad (Hom. Il. 8.18):

If I see anyone acting apart and helping either Trojans or Danaans, he shall be beaten beyond the limits of universal order [kosmos] ere he come back again to Olympus; or I will hurl him down into dark Tartaros far into the deepest pit under the earth, where the gates are iron and the floor bronze, as far beneath Hades as heaven is high above the earth, that you may learn how much the mightiest I am among you. Try me and find out for yourselves. Hang me a golden chain from heaven, and lay hold of it all of you, gods and goddesses together - tug as you will, you will not drag Zeus the supreme counselor from heaven to earth; but were I to pull at it myself I should draw you up with earth and sea into the bargain, then would I bind the chain about some pinnacle of Olympus and leave you all dangling in the mid firmament. So far am I above all others either of gods or men."

Plato (427-347 BC) has two or three quotes either literally or more descriptively to the concept of the golden chain, the most often quotes not necessarily the most interesting: (Theaet. 153c)

it learns nothing and forgets what it has learned?

Socrates: Then the good, both for the soul and for the body, is motion, and rest is the opposite?

Socrates: Now shall I go on and mention to you also windless air, calm sea, and all that sort of thing, and say that stillness causes decay and destruction and that the opposite brings preservation? And shall I add to this the all-compelling and crowning argument that Homer by “the golden chain”1 refers to nothing else than the sun,

A discussion of the metaphors of the Golden Chain in the Neoplatonist school of Athens is given in John Glucker's 'Antiochus and the Late Academy' (1978), examples are:

Since from the supreme good, mind arises, and from mind, soul, and since this in turn creates all subsequent things and fills them all with life, and since this single radiance illumines all and is reflected in each, as a single face might be reflected in many mirrors placed in a series; and since all things follow in continuous succession, degenerating to the very bottom of the series, the attentive observer will discover a connection of parts from the supreme God to the last dregs of things, mutually linked together and without a break. This is Homer's golden chain, which God, he says, bade hang down from heaven to earth. Having said that, Homer asserts that Man alone among earthly creatures has a common fellowship of mind, or soul, with heaven and the stars.

Pietro Valeriano (1477-1558) made a round-up of interpretations in Hieroglyphica' (1556). This book - the first modern study of Egyptian hieroglypshs - was a classic, a very popular book in Europe, represented seven times over 120 years in Latin, translated early on in French and Italian. In this book, under the heading 'Homerica Aurea Catena' he writes:

There can be no doubt that this golden chain .. signifies, according to the testimony of Macrobius and Lucian, the connection between human and divine beings, and the bond by which God when he pleases draws us to himself, where we could never ascend by our own efforts: such that he wishes to show that his spirit is directed by God, may appropriately depict this chain hanging from a star and drawing him to it