Christian Rosenkreutz is the name of an important incarnation of the individuality of Lazarus that was initiated by Christ-Jesus, and became the 'disciple that Jesus loved' - the author of the John's Gospel and the Book of Revelation. He is one of the masters of the White Lodge, and one of the two masters of Rudolf Steiner. Also Daskalos mentions him as his master or teacher 'Yohannan'.

The individuality of John or Christian Rosenkreutz connects esoteric ('Johannine') christianity with the rosecrucian movement and contemporary spiritual science or anthroposophy. This individuality has been incarnating every century (GA264), a well-known incarnation was as the Comte de Saint-Germain in France during the time of the French Revolution. See Schema FMC00.166 below.

FMC00.166 gives an overview of some key incarnations of the author of John's Gospel, Christian Rosenkreutz, one of Rudolf Steiner's masters. 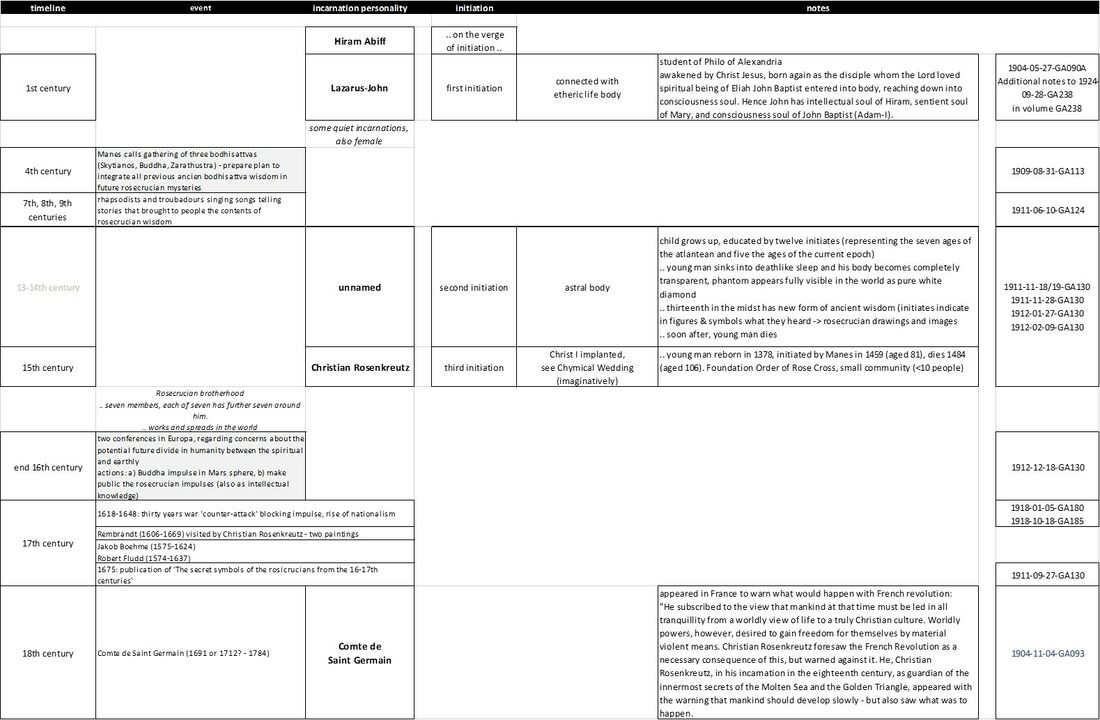 FMC00.311 shows the well known illustration of 'Le Comte de Saint-Germain'. This gravure (made by Nicolas Thomas in 1783) is supposedly a copy of an original painting which has since been lost. 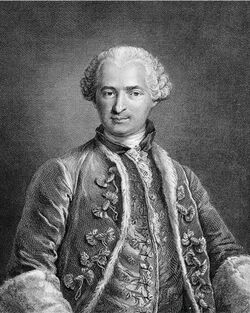 FMC00.227 shows paintings by Rembrandt of a man who visited him, see quotes by Lievegoed and Vreede below.

Rudolf Steiner made explicit mention of Christian Rosenkreutz and Master Jesus as the two Masters of the White Lodge representing the Christian and Rosecrucian European stream in which he worked.

Furthermore, he lectured specifically on 'The Mission of Christian Rosenkreutz' in GA130 (see references from schema FMC00.166) :

.. covering details of the tasks and deeds of Christian Rosenkreutz and Rosicrucian Christianity, such as his influence on G.E. Lessing and Madame Blavatsky. Other related topics include the mission of Gautama Buddha on Mars, the Bodhisattva Jeshu ben Pandira and his connection with the Gospel of St. Matthew, the coming of Maitreya Buddha, the workings of karma, the living etheric reality of Christ today and the future stages of his increasing manifestation to humanity.

It was known to the College of the twelve wise men that a child was to be born who had lived in Palestine at the time of Christ and had been present when the Mystery of Golgotha had taken place. This Individuality possessed great powers of heart and a quality of deep, inward love which circumstances had since helped to unfold in him. An Individuality of extraordinary spirituality was incarnated in this child. It was necessary, in this case, for a process to be enacted which will never be repeated in the same form. The following does not describe a typical initiation but is an altogether exceptional happening. It was necessary for this child to be removed from the environment into which he was born and to be placed in the care of the Twelve at a certain place in Europe. But it was not the external measures adopted by the twelve wise men that are of essential importance; what is important is the fact that the child grew up with the Twelve around him, and because of this, their wisdom was able to stream into him. One of the Twelve, for example, possessed the Mars-wisdom and therewith a definite quality of soul — a mood-of-soul tempered by the form of culture standing under the influence of Mars. The forces of the Mars culture endowed this soul with the faculty, among others, of presenting the occult sciences with fiery enthusiasm and ardor. Similar planetary influences were also at work in other faculties distributed among the Twelve.

The development of the child’s soul proceeded harmoniously under the influences pouring from the twelve wise men. And so the child grew up, under the unceasing care of the Twelve. Then, at a certain time, when the child had grown into a young man of about 20, he was able to give expression to something that was a kind of reflex of the twelve streams of wisdom — but in a form altogether new, new even to the twelve wise men. The metamorphosis was accompanied by violent organic changes. Even physically the child had been quite unlike other human beings; he was often very ill and his body became transparent, as though filled with light. Then there came a time when for some days the soul departed altogether from the body. The young man lay as if dead … And when the soul returned it was as though the twelve streams of wisdom were born anew. He spoke of new experiences. There had come to him, from the Mystery of Golgotha, an experience similar to that of Paul before Damascus. Thereby it was possible for all the twelve world-conceptions, religious and scientific — and fundamentally there are only twelve — to be gathered together, synthesized in one. The twelve basic world-conceptions were gathered together into one whole which could do justice to them all.

It remains now to be said that the young man died very soon afterwards. His life on Earth had been brief. His mission had been to create a synthesis of the twelve streams of wisdom in the sphere of thought and to bring forth the new impulse which he could then bequeath to the twelve wise men who were to carry it further. A great and significant impetus had been given. The name of the Individuality from whom this impulse originated was Christian Rosenkreutz. The same Individuality was born again in the fourteenth century and this earthly life lasted for more than a hundred years. In the new earthly life he brought to fruitfulness, in the outer world too, all that he had lived through in that brief space of time. He traveled all over the West and over practically the whole of the then known world in order to receive anew the wisdom which in the previous life had quickened in him the new impulse — the impulse which, as a kind of essence, was to filter into the culture of the times.

The Rosicrucian stream is the oldest stream of wisdom on earth. Cain was the builder of cities, that is to say, of a man-built world. He came to earth in one of his incarnations as Hiram, the builder of Solomon's temple. Hiram knew how to bring cosmic reality through human will onto earth in spiritual forces. Lazarus, moreover, was the reincarnation of Hiram, the builder of the temple. He was the same individual who lived in Cain and Hiram — and who became the first initiate of Christ Himself. After his life as St. John, he was very often incarnated.

In 1250 this great human individuality on earth went through a special initiation as described in the lectures about Christian Rosenkreuz. After this last initiation, in 1250, he was known to history as Christian Rosenkreuz. It was he who unravelled the red thread of esoteric Christianity on earth in the time of Kali-Yuga, and between the mystery of Golgotha and the year 1899. But there was no real renewal of the mysteries. The spiritual worlds didn't speak through the mysteries. The only thing which was possible was that people tried to preserve what was there out of older times. But through this world which grew more and more materialistic, there was this secret red thread of small groups of people who were bearers of the real stream of esoteric Christianity. They were brought together by Christian Rosenkreuz. There was one whom you all know: Rembrandt.

It was Christian Rosenkreuz who, appearing in a particular human form for Rembrandt, taught Rembrandt the secrets about light and darkness. Rembrandt (1606 –1669) twice gave a portrait of the man who brought him the knowledge of light and darkness. One is the warrior, which is hanging in Glasgow, and the other is the so-called Polish Rider, which is New York.

Elisabeth Vreede grew up in The Hague with parents in the Esoteric School of the Theosophical Society. The Freemason Lodge was located where now is the Vredespaleis. She recalls that when the whole family became connected to Rudolf Steiner, the latter said during a visit, looking out of the window across the road to Park Sorgvliet in front of the house:

FMC00.166 gives an overview connecting the period of the Mystery of Golgotha down to the 19th century and the end of the period of darkness (kali yuga) in 1879. This picture can be overlaid with other pictures or view on that timeline:

Together, they show the transformational period of the last two millenia, with the Mystery of Golgotha, the birth of the consciousness soul, and the end of the kali yuga period of darkness. This totally impacted the human consciousness (the arising of autonomeous rational intellectual thinking from, say, the 15th century, and the future new clairvoyance) the process of Initiation (see Mysteries of the Spirit, the Son and the Father)